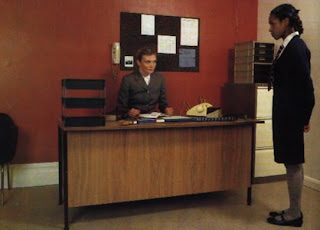 A funny time of year, this post-Christmas season; funny in so many ways, not all of them ha-ha funny. For a start, it is very difficult to get a pie. Most bakeries close on Christmas Eve, and do not open again until mid-January - the beaches of the Coromandel must be heaving with bakers, basking in the sun. The committed pie enthusiast must scour the city in search of sustenance, learning to accept continual disappointment as once-welcoming bakeries are found to be locked and barred. The only hope is Hollywood -  the oddly-named chain with branches everywhere  that keep right on throughout the dry season. Hollywood also serves the best vegetarian pie in town, possibly the only vegetarian pie in town. In this pie desert, greengrocers thrive, providing healthy foodstuffs at affordable prices. The nutritionists must be delighted - for once it is more difficult to poison yourself than to eat something good.

Oh well, at least you are not in an office.  This instructional video shows you that office life is dreadful. It also shows that Sleater-Kinney were superb, but you knew that already. Please do not try to make hang-gliders from window envelopes: the technology is as yet unproven.

You really lost me

Gentle readers, after years of searching, I believe I may have found the Eldorado, or possibly the Pinto, of music television: the worst television recording ever made of a band playing a song. It comes, not surprisingly, from Germany, a country where people are very keen on both the Rock and the Roll but, because of cultural and economic circumstances, have never quite managed to be hip.

This televisual experience comes from the television programme "Beat Club," which in Germany was having great success in the Sixties. This recording was made in 1972; perhaps not coincidentally Beat Club was [ahem] canned in the same year. It features England's finest, the Kinks. For some reason they are playing a song they made eight years earlier and for some other reason they are mostly wearing red - against a blue background. It is all quite startling.

Consider how this clip progresses. One camera operator seems quite fixated upon Dave Davies, perhaps because of that regrettable beard. While his brother Ray sings, the camera remains firmly upon Dave. Then, Ray suddenly appears, perhaps from another studio: the brothers' difficulties are well-known. Ray's appearance is brief, just filling in before the cross back to Dave and the bass player, John Dalton. But then, just as Dave's solo comes up, attention is directed to the hands of the keyboard player, John Gosling, and remains there for the duration of Dave's solo. Next we see Drummer Mick Avory - who either did not get the memo about wearing red or chose the wrong wash cycle; then a brief glimpse of Ray (nice bowtie) and more of the over-dressed Gosling, or is it John Peel? We see Ray again, almost out of camera and still with no indication that he is with the rest of the band. Then it is back to Dave.


Still, it was nice that they went to all the trouble of wrapping the microphones in red plastic.

I can’t count the times, down the years, that after some new outrage friends would call me and ask, “What happened to Christopher Hitchens?” – the inquiry premised on some supposed change in Hitchens, often presumed to have started in the period he tried to put his close friend Blumenthal behind bars for imputed perjury. My answer was that Christopher had been pretty much the same package since the beginning — always allowing for the ravages of entropy as the years passed.

There is nothing like a death in the family to bring out the nastiest in people, and so it is with the passing of Christopher Hitchens. Whilst others mourn, Alexander Cockburn seethes. Hitchens was a traitor, the man who changed his mind, the man who broke the circle. He also was a much better writer than Cockburn, which probably lies behind the resentment of the survivor. "As a writer his prose was limited in range," mutters Cockburn. Perhaps he is dimly aware that Hitchens would never write a sentence so deadened as that one, a sentence reminiscent of school reports or annotated bibliographies, typed and spiral-bound. Note also the clumsy and sub-claused sentences with which Cockburn began his  dirge. By contrast, here is how Hitchens began his last essay:


When it came to it, and old Kingsley suffered from a demoralizing and disorienting fall, he did take to his bed and eventually turned his face to the wall. It wasn’t all reclining and waiting for hospital room service after that—“Kill me, you fucking fool!” he once alarmingly exclaimed to his son Philip—but essentially he waited passively for the end. It duly came, without much fuss and with no charge.


Here is an instructional video:

A life on the ocean wave

The oil prints featured in this exhibition were made with birds killed by the Rena oil spill. They are just two of an estimated 20,000 birds killed after the shipwrecked Rena spilled 350 tonnes of oil into the Bay of Plenty. The images are a stark reminder of the devastation an oil spill can cause.

No they are not. These Rorschach penguins are a stark reminder that Greenpeace is creepy and weird. People in that organization took dead birds and made prints with them, the way you made prints with half a potato in primary school. Greenpeace posts a video to show how it was done. Making a print with a penguin and the oil that killed it is very peculiar indeed, and oddly reminiscent of the bizarre blood cult that is Roman Catholicism, with its relics and vials of blood and images of its demigod impressed on handkerchiefs and shrouds; as I said earlier, it is (a) creepy and (b) weird.


Scroll towards the bottom of the page. It deepens like a coastal shelf. At the end is a special offer:

Win A Ghost Bird Print! The prints made for the Oil On Canvas exhibition are all original prints made with the body of a little blue penguin and the oil that killed it  following the Rena shipwreck in the Bay of Plenty. The prints are not numbered because each is an original. No more will be made.  Some will be Contributed to galleries and some will be auctioned but we’re giving one away right here...

Each print is an original, you see. It is a monoprint. Most artists make monoprints with a woodblock or with lino. Greenpeace use penguins.

Like everything other thing Greenpeace does, this was a group activity. As the photographs show, many people were involved and they all had a special uniform. Whenever Greenpeace does anything, there is always dressing-up to do. They wear special clothes, fit for the purpose and identical with each other; just like the... no, let's not go there.

These people made art with with their penguins. Art is a collective activity - there is no artist, only the art - which serves the purposes of Greenpeace. Everything Greenpeace does serves its sole purpose, which is to promote itself.

There are many environmental organisations which go about their work of protecting the environment. Greenpeace is much better known than these organisations because it is not one of them. It is a media corporation. It produces media events, situations if you like, about the environment. These encourage people to support Greenpeace, so that it can promote itself further. It spends a lot of the money it raises on ships and inflatables, so it can make more situations.

Of course, to criticise Greenpeace is to invite complaint from the glassy-eyed trustafarians who make up its volunteer membership. These are the people who wear the uniforms on the ships and inflatables, the people who press the penguins on to the paper. These are the people who will pounce on you on the street, brandishing clipboards and photographs of dead animals. These people are very committed. There are other chuggers in Greenpeace who are paid commission, but they have lesser status because the are thought to be less committed. If they do not make targets for their chugging, they are sacked. The volunteers, the gilded youth of Greenpeace, go everywhere their masters demand and do everything asked of them, whether it be manning an inflatable or pressing a penguin.

Anyway, Merry Christmas and here is a Canadian woman with a ukulele and a dead bird:

Managing above our weight on a world stage

My Waikato Management School degree is on the world stage. While studying they had the triple crown accreditation - achieved by only the top 2% of the worlds institutions, since they have improved to the top 1% - bundled in with Cambridge and Oxford - infact the only ones in a thousand years who were invited into the Cambridge debating chamber. If people think that the real debate occurs in the the debating chanbers of various parliaments they are wrong. What do you think has occurred for that thousands years in the Cambridge debating chamber - and are yo more interested in the results on GE crops from this chamber or the debating chamber of the a bunch of newbies in parliament?

Quite. Deborah Hill Cone writes a considered piece about the commercialisation and degradation of our universities, so JD leaps in to correct her, with news of the hitherto-unknown Cambridge debating chamber, almost as old as the Althing  and closed to all outsiders but the Waikato Management School. Cambridge celebrated its 800th anniversary in 2009. Do the maths. Correct the grammar.

Barely literate, under-informed and over-opinionated, JD is a shining example of the modern managerial class. Armed with a degree in Doing Things, trained but not educated, JD doubtless will go far - probably in a BMW. Whether JD will make any sense is another matter.

Here is a long piece full of difficult words by Keith Thomas in the London Review of Books, a magazine read by bookish people:


We are all deeply anxious about the future of British universities. Our list of concerns is a long one. It includes the discontinuance of free university education; the withdrawal of direct public funding for the teaching of the humanities and the social sciences; the subjection of universities to an intrusive regime of government regulation and inquisitorial audit; the crude attempt to measure and increase scholarly ‘output’; the requirement that all academic research have an ‘impact’ on the economy; the transformation of self-governing communities of scholars into mega-businesses, staffed by a highly-paid executive class, who oversee the professors, or middle managers, who in turn rule over an ill-paid and often temporary or part-time proletariat of junior lecturers and research assistants, coping with an ever-worsening staff-student ratio; the notion that universities, rather than collaborating in their common task, should compete with each other, and with private providers, to sell their services in a market, where students are seen, not as partners in a joint enterprise of learning and understanding, but as ‘consumers’, seeking the cheapest deals which will enable them to emerge with the highest earning prospects; the indiscriminate application of the label ‘university’ to institutions whose primary task is to provide vocational training and whose staff do not carry out research; and the rejection of the idea that higher education might have a non-monetary value, or that science, scholarship and intellectual inquiry are important for reasons unconnected with economic growth.