Tiso is a tosser and TERF is a slur 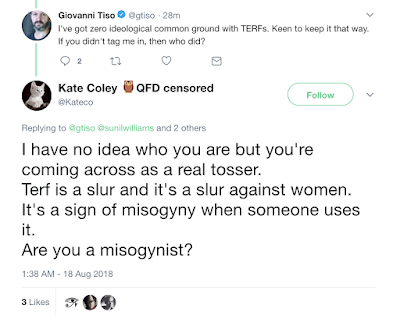 Men know what a woman is in Holbeck 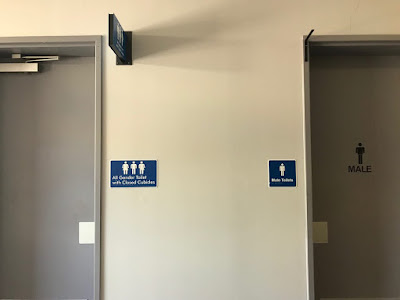 Full speech from today’s Declaration of a Sex Based Rights at Leeds Civic Hall, by Cllr Sarah Field:

Good afternoon everyone and welcome.

Firstly I’d like to thank everyone here for coming today, our panel and the Leeds Spinners for inviting me to Chair.

Our brilliant panel of academics will be speaking today about the Declaration of Sex Based Rights. But by way of introduction I am going to talk a little bit about Leeds and why I’m here.
So, I just want to start off by thanking the many women on the Mumsnet Feminism boards. You are a constant strength and inspiration.

About three years ago, not long after I was first elected, I was contacted by a woman in Leeds, for advice. Her six year old daughter had been verbally attacked and then subjected to a violent outburst by a 17 year old male who had been allowed to join a local girls group as a helper. This was because he said he identified as a female. What had this child done? She had asked him if he was a boy. And then this six year old girl had been made to stand alone in front of the entire group and apologise to him.

And I couldn’t get my head around this. So I began to do some research. And this was how I found my way to gender critical thinking and radical feminism.

There is no such thing as living as a woman. We are women. And it is our female biology which makes us women. It is our sex. And biological sex is observable in every single cell in our bodies: it is a physical, material and biological fact. And our sex is what makes us a class. Our sex which makes us uniquely vulnerable to male violence. Our sex which means we bear the entire burden of reproductive labour. The structural oppression which women face as a class is because of their sex. And that is why all women need legal recourse to separate and sex segregated spaces.

It is simply not ethical to categorise males as females based on their subjective feelings. To do so means the female sex no longer has legal protections or legal meaning and is instead reduced to destructive, regressive gender stereotyping.

If you cannot define women, then you cannot defend them.
Which brings me to Leeds City Council, which famously prevented a meeting here last year to discuss changes to the Gender Recognition Act. When the WPUK meeting was cancelled I read the email from a Labour Councillor and then I read the flurry of replies and actions that not once asked for clarification or any other viewpoints - just this blind acceptance of a hateful narrative – and it became clear to me that it’s become a virtue to dismiss, intimidate and silence women.

That meeting was to discuss proposed changes to legislation and the government’s consultation. Its purpose was not to tell Trans people what is best for them, but to tell politicians and law makers what is best for women.The vast majority of those who ask questions about Self-ID are lifelong left leaning, are lesbians, trade unionists, LGB allies and of all faiths and none. These accusations we face - transphobes, bigots, TERFs, religious fundamentalists, hate preachers - are utter nonsense. And I’ve had enough.And I must say I absolutely refute in the strongest terms any accusations of homophobia against gender critical women. A huge number of them are lesbians. And I stand with my lesbian sisters. Just as I’ve always done for years of solidarity with the LGB community. And since the woke brigade of word salad identity politics seems to love a good cliché, I’ll throw in a mention of my magnificent gay best friend and godfather to both my children.

Leeds City Council has brought in Self-Identification. Anyone can change their sex, or “gender marker” as they call it, across all council services and departments by completing a short online form.

When I asked, under FOI, for the Equality Impact Assessments I was told they didn’t do any. When I asked, under FOI, how this might impact sex segregated services and spaces I was told Leeds City Council does not have any such spaces or services. When I asked, under FOI, for a comprehensive list of women’s and men’s clothes, as cross dressing is specifically defined in council policy as a protected characteristic, I was told no such list exists. When asked to define a woman, they said no such definition exists.
So to be clear: men in this city can access a woman’s changing facility, toilet, leisure facility or support group or service – anywhere they are vulnerable, traumatised, undressed or asleep - because men might at some point feel like they are something which the council says is indefinable, but might mean he once wore something which may or may not be something a woman might also wear.

Well, women fought for those spaces and they are not this council’s to give away.

It is absurd, it is dangerous and millions of women across the country are saying we have had enough. You cannot identify into an oppressed class because you cannot identify out of an oppressed class. And women are uniquely oppressed across the planet: reproductive health and autonomy, Female Genital Mutilation, violence, rape, child marriage, no right to vote, death in childbirth, post-natal illness, denied access to education, lower wages, chemical contraception, sex trafficking, surrogacy, pornography, prostitution and objectification.

I’ve had women in prisons and post-prison services in Leeds who have contacted me in fear and despair because they are confined with men who threaten them with rape, assault them, repeatedly expose their so called female penises and taunt them about playing the system and flushing their hormones down the toilet.

Our statistics will be skewed and we will lose a tool of analysis that provides us with the ability to challenge the very inequalities for which sex based provisions and quotas were created.

And of course there is a wider underbelly of misogyny in Leeds. The so called managed zone of prostituted, emaciated and addicted women is our flagship. In the last few months I’ve visited Holbeck twice, once at night where I observed several men out on the street openly watching pornography in their cars as women stumbled to them to be used and discarded for a fiver. During the day I was approached by punters three times in 10 minutes while simply standing by a car for some fresh air at 2pm. We are spending hundreds of thousands of pounds so men can buy the addicted bodies of the most vulnerable women in the city. Men know what a woman is in Holbeck.

I’m often asked how I would feel if I was born in the wrong body. And I say, I’ve been feeling like that every single day for as long as I can remember. You only have to go into a shop, turn on the TV, open a magazine, click on the internet and women are assaulted with GET A BIKINI BODY, 12 WEEKS UNTIL YOUR CHRISTMAS PARTY BODY, GET THE BODY YOU DREAM OF, THE BODY OF SOMEONE 20 YEARS YOUNGER, THE BODY YOU DESERVE. Botox, surgery, hair removal, Photoshop, permanent makeup, designer vagina. We get it.

I don’t think all men are rapists. I don’t think all men are intrinsically violent, creepy or degenerate. God knows I love my dad and my brother and my dear nine year old son. But 98% of sexual violence is committed by men. And there is no way to tell the good ones from the bad ones. There never will be. That’s why we need our spaces and services and boundaries, for our privacy, our dignity and our safety. It’s why we need to preserve the social norms which generally prevent men from entering our spaces and preserve our confidence to challenge men who do so. Bad men will do anything to gain access to women and girls. That’s why every institution in the world attracts those who will use power and access to abuse us. If they do it in schools, the care system, churches and families then they will sure as hell do it in prisons, toilets, refuges and changing rooms. They already are.

In terms of protecting females from a significant minority of dangerous males, these reasons don’t cease to operate when males self-identify as women. And self-identification removes any gatekeeping, safeguarding or requirement for any man to do anything other than complete a cursory administrative process via an online form.

I’m truly sorry for any man who feels imprisoned and tortured by masculinity. But that is something for men to deconstruct, to dismantle and to overthrow. And there are men doing it. There are transsexuals and cross dressers and allies against the male stereotypes which damage everyone. But it is not the moral duty of women to facilitate that. If your feminism prioritises the internal identifications of men over the material conditions of women then you are not a feminist. In a world of structural and systematic oppression, and an epidemic of male violence, we owe it to women and to the legacy of every feminist who has fought before us, to stand for ourselves.