Sons of the Desert

Christchurch woman Rose Fraser and her children John and Lela invested US$285,000 ($341,700) in leveraged options with the firm. This meant they bought gold and borrowed against that investment to buy more, hoping the profits from its sale would be more than the interest payable.

You would have thought by now that the adjective leveraged and the noun options would be enough to make any potential investor turn around and run as far away from the potential investment as they can. But no, the world still contains people like the Frasers. People like the Frasers have two fundamental characteristics that make them attractive to people called brokers: people like the Frasers are (a) greedy and (b) stupid, a irresistible combination to those who will gladly separate them from their money. The Frasers could have put their not inconsiderable sum of money into a bank and gained a safe and healthy return; but no, they wanted to make their money work for them (or somesuch vapid phrase) and so they entrusted all of it  - half a million - to a company which had a single director, a director who had a single big and stupid idea about making money out of money.

When the inevitable happens, people like the Frasers get all whiney and tell their stories to the papers, which are happy to take photographs of the whiney victims looking miserable. And so it came to pass that the New Zealand Herald puts this story on its front page; and this during the week in which it is running an important series about the poor in Auckland - people who never have had this kind of money and probably would make a better job of hanging on to it if they had such kind of money.

Oh well, at least the Government won't be bailing them out with our money.

Neil Young and the Shocking Pinks

But how exactly do we identify these people, so we can beat them to death with whatever weapons come to hand? It is not as if they are going to tell us "I am a brand ambassador; I try to cover the unfathomable  void at the heart of my very being by feigning loyalty to the meaningless products of advertising agencies; my favourite colour is Butterscotch; on Tuesday nights I go to Jazzercise classes." There must be a way to isolate these wretched creatures from the lumpen bourgeoisie and cull them. Its for their own good as m uch as ours. Besides, it would be an awful lot of fun.

is the surface wood or concrete? from a distance it looks like concrete but up close it looks like wood. maybe they cast the concrete to have wood texture as to blend in with the natural environment more. japanese designers are so conscious of the environment.

Thus wrote a contributor to a Skyscaper City thread, on the subject of Norihiko Dan's Sun Moon Lake Visitor Centre and Administration Office, at Hsiangshan, Taiwan. That's the trouble with kids today: they know nothing about brutalism.

They also get fooled again by this sustainabilty racket. Let us take another look at the building and its environment. Notice, if you will, how the trees keep their distance. In the sumptous and paper-based December edition of L'Arca it is described thus:


As the basic policy for the design, the first aim here was to propose a new model for a relationship between the building and its natural environment while preserving the surrounding scenery and keeping the inland area from becoming dead space. The half-architectural and half-landform project creates a new dialogue between the human being and nature that provides another new dimension to this area.

Yes, gentle reader, that is archiwank. What they really did was chop down a load of trees and create the opposite of what they claim. They made a dead zone and filled it with grass - a plant native to golf courses, campuses and administration centres. To show their commitment to a new dialogue between human being and nature, they put grass on the roof, just like everyone else does these days. It is green, you see. What's more, beside the lake they built a lake; just what the lake needed.

But why? Does nobody ever ask why a lake should need a visitor centre? It is a lake; you can visit. The lake is accessible from many points on its shore. Trees grow beside the lake; we call this a forest. You can walk through the forest to get to the shore. Thank you for visiting. Please take your litter home with you.

But no; this lake, just like every other surviving piece of nature, needs a visitor centre and an administration office. This is because people are no longer considered capable of simply going to a place and experiencing it. They must have Education. They must be told what to experience and how to experience it. They must also have Facilities. Of course, none of this ever is fully visible because of the haze of pollution that interrupts the diagalogue between human and nature. But the centre does have ample parking. The lake must also be administered by The Sun Moon Lake National Scenic Area Administration. The lake administrators require offices and parking.

Unfortunately, a portion of the forest had to be removed to accommodate the visitors and the administrators, but this space has been landscaped. As L'Arca notes, "By adopting this composition the building and the land form an integrated garden rather than being two separated entitites." Ah yes, an integrated garden; that would be it. You would hardly notice the presence of the building, what with the green roofs that rise gracefully out of the landscaping and the stand of trees that will grow into a majestic canopy within the next half-century, climate change permitting.

Got them Lake Placid Blues 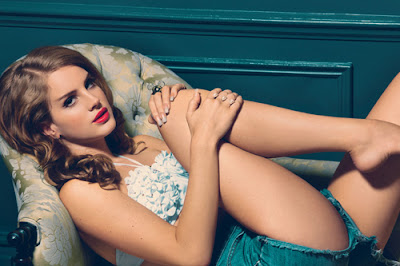 There's always the chance that she's playing a character, although that seems doubtful, because when Lana Del Rey is in character, she really lets you know about it.

Except she wasn't. She's fake; just like all the others. Just like Joe Strummer. Remember how he said to the NME, back in 1977, that he got into reggae because he was the only white boy in his class at school? But then it turned out his school was the City of London Freemen's School and that daddy was not a bank robber; he was a diplomat.

Just like Shane McGowan, that authentic Irish rebel;  born in Pembury, near Tunbridge Wells, educated at Holmewood House, then at Westminster. Then there was Tom Robinson, who sang songs about working class experience, about his brother Martin and going to borstal;  Tom attended Friends' School, Saffron Walden; his brother Philip is a television producer. Robin Hitchcock is a Wykehamist;  Nick Drake was a Marlburian. Members of the Zombies were at St Albans,  Radiohead formed at Abingdon;  no alarms and no surprises there. Coldplay come from Sherborne; bedwetters. 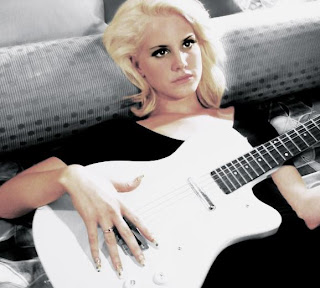 So what is so special about Lana? No, not her real name; it was chosen by the management. Yes, her daddy's rich and her mamma is good looking; she is just another rich kid, slumming it. Aren't they all? Jim Morrison's father was an Admiral; so was Tina Weymouth's. Bands are formed in film schools and art schools, by middle-class kids who want their lives to be authentic. They study sculpture at  St Martin's college and want to be like common people.

Rock'n'roll is authentic; thus it is fake. Surely everyone knows that. Listen to the what the man says: "after the umpteenth song in which she either puts her red dress on or takes her red dress off, informs you of her imminent death and kisses her partner hard while telling him she'll love him 'til the end of time..." And yet, despite the obvious similarities with Twin Peaks, still Petridis is disappointed when she turns out to be the realtor's beautiful daughter.

So what does Petridis suggest we do? Ignore the lyrics, that's what. So, she's like a singer-songwriter and we are just going to pay no attention to the singing or the songwriting. We'll just let ourselves be swept along by the melodies; we'll just be in denial.

But what about the pictures? Look at this: 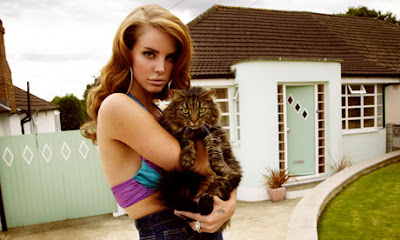 So so Moderne. Ask yourself this: is this the real life, or is this just fantasy? And yet, the Observer used it in September to illustrate an article that began:


We crave a popstar who is authentic, who thrives because of their talent, not PR. So when you stumble across someone like Lana Del Rey – her popularity apparently born online and growing per YouTube click – it's hard not to be sceptical as to whether she's actually too good to be true.

Well no, it was very easy to not be sceptical. The reasons for doubt were staring you in the face but you chose not to look, because you craved authenticity. Had you just looked at the pictures, you would have seen that it is all made up. And if you knew just a little art history, you might have noticed something of the work of Cindy Sherman in these images. It is all a carefully constructed hyper-reality. It is not real. Reality is not nearly as interesting.

But you so wanted it to be real that you overlooked the obvious fiction. And now you are really angry, not because Lana del Rey is fake but because you made her real, and now you realise you made a fool of yourself. It was all pretend, silly. It was just a game but you thought it was true love.