The Blessing of the Lanyards 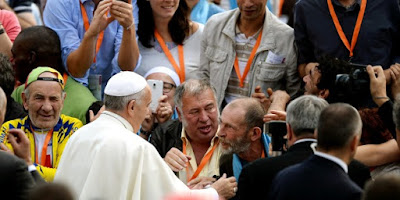 One of the newest traditions in the Papal calendar.

Manspreading for pleasure and profit 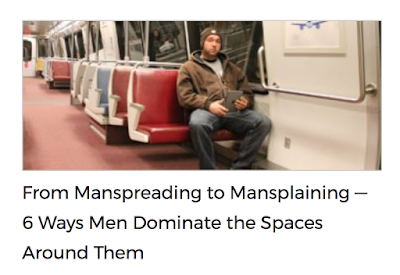 Pace Everyday Feminism, this man could not help but dominate the space around him. He is alone in his section of the train carriage – apart one other passenger, whose reflection can be seen in the window (Moscow rules). I think we should all cut this man some slack.

How they used to live 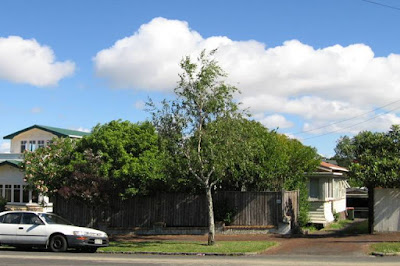 The childhood home of the historian Keith Sinclair: 33 Johnstone Street, Point Chevalier, Auckland. The property more recently was the registered address of a company called Danish Control. The photograph was found in 2015 on the Quotable Value website. 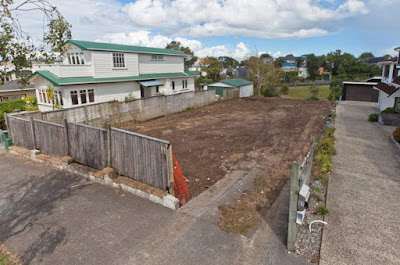 
Nevertheless, I wrote about the house in my thesis. Here is an exclusive but inconclusive extract:

In his 1993 autobiography, Halfway Round the Harbour, the historian Keith Sinclair recalled his childhood home in the Auckland suburb of Point Chevalier, to which his family had moved in 1931, when he was aged eight:
The house, I now know, was a Californian bungalow, New Zealand version, built in the late 1920s. Most of Point Chevalier and neighbouring suburbs were covered with rows of these houses, put up by ‘spec’ builders. Our house had a corner bow window, with a window seat, a small side porch and a back verandah. There was a coloured-glass window picturing a sailing ship—another mark of the Californian bungalow—a feature area of wood shingles beneath the bow window. There were three bedrooms, one of which had probably once been the living room, and a sun-porch.
The family home was merely a speculative builder’s bungalow, but at had an identity. It was Californian; it was of a type that could be found in books. It had an architectural identity, albeit one Sinclair only discovered later. Sinclair’s recollection was similar those of many New Zealanders. In 1985, the architect Nigel Cook spoke for his generation: “We’d grown up in post-war houses, our parents in state houses and our grandparents in Californian bungalows, so we knew more or less by personal contact those houses that went back to World War One.” 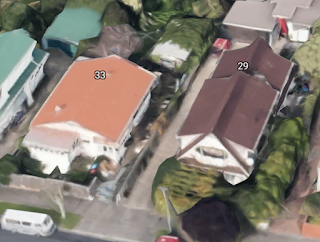 Sinclair’s knowledge that this house was a Californian bungalow seems unremarkable. His brother, Donald, knew it as well: “The Californian bungalow in which we lived had a kitchen, where we had our table and chairs, and a form at the back for the three youngest boys.” That Californian bungalows could be found in Point Chevalier is confirmed by the website of Quotable Value, which describes the suburb’s houses as “generally large and built in either 1920s Californian Bungalow style or 1930s art deco style.” Further confirmation can be found in the information sheet for the Point Chevalier Walking Tour, organised for the 2013 Albert-Eden Bungalow Festival:
Influenced by popular American housing trends of the time, the typical New Zealand “Californian Bungalow” proliferated in Point Chevalier in the late 1920s. Key features include a low-slung form, asymmetrical composition, shallow pitched gable roof with wide eaves, deep porches, revealed structural elements, emphasis on hand-crafted and rustic materials (including use of shingles), and an informal open plan.
Beyond Point Chevalier is a considerable body of writing that identifies the Californian bungalow as the main house type of the interwar suburbs in New Zealand. In 1973, Auckland University geographers wrote, in New Zealand: Pacific land down under, “American styles of housing, with the California bungalow supreme, dominated building between the two world wars.” In 1984, Hamish Keith wrote, “In the 1920s the suburbs were invaded by a new style of house, based on the Californian bungalow. Its spaciousness and informal layout suited the large suburban sections.”  Di Stewart wrote in 1992, “Just as the bay villa suburbs had been seen as a panacea in their time, the new suburbs of speculatively built Californian bungalows, spreading out on their quarter-acre sections beyond the old suburbs, were now promoted as the hygienic lifestyle for the 1920s.”  The fifth edition of the Bateman New Zealand Encyclopedia, published in 2000, informed the reader, “between the two world wars, builders constructed thousands of bungalows that were inspired by more informal California housing and sited so that the family car could be garaged off the road.”
This certainty that Point Chevalier was a Californian bungalow suburb, and that New Zealand was dominated by the Californian type, is common knowledge. But it is contradicted by the real estate advertisements published in the newspapers of the time. Of the many bungalows in Point Chevalier advertised for sale or let in the Auckland newspapers during the twenties and thirties, only one was described as Californian. A handful of other descriptive terms were used, but most houses were simply called bungalows. The Californian bungalow in Point Chevalier was described at greater length than the brief advertisements for ordinary bungalows, since it was more expensive, larger and better equipped than the sort of house in which the Sinclairs lived. The advertisement appeared in 1925, as a private sale by the owner:
£100 deposit—£1125 Point Chevalier, one minute bus and beach, absolute sacrifice—Californian Bungalow. Heart Kauri, five rooms comprising three bedrooms, sitting room, kitchen, bathroom, pantry, porcelain bath and basin, hot and cold water, built-in wardrobes and cupboards, linen press and airing cupboard, range and fireplace (tiled): washhouse, h and c; section 50 x 150 ft., laid out in lawns and garden, fruit trees, etc. Double gate entrance with wide paths tarred and shelled. Plenty of room for garage. Owner is compelled to sacrifice.
This house, with its three bedrooms (one probably once the living room) sun-porch and verandah, is more substantial than the Sinclair house. This advertisement is atypical of advertisements for houses in Point Chevalier, both in its descriptive detail and in the house having such details to be described. It is also twice the price of a typical Point Chevalier bungalow. A typical advertisement would be like that placed in 1927 by “the land man”, Wm. A. Horne Ltd:

St Etienne – How We Used to Live: 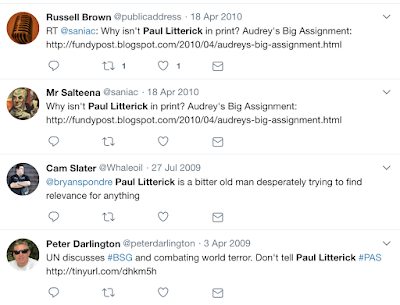 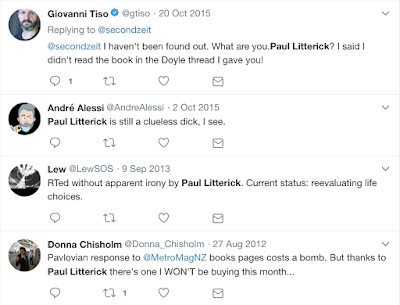 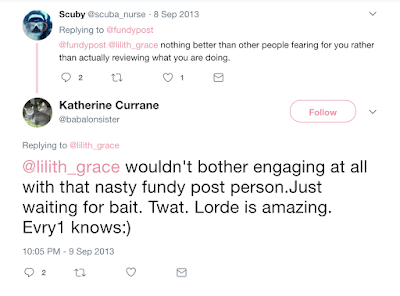 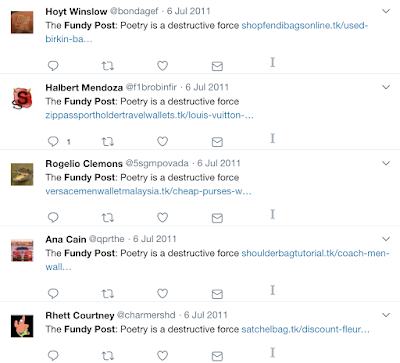 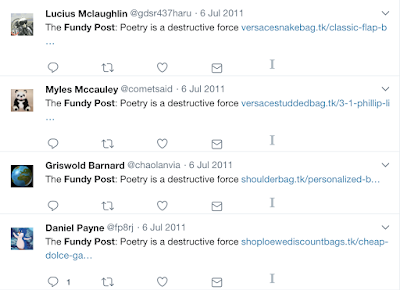 
WTF is this? Someone who thinks he is a generic Bailey impersonator?  By the way, this is not Derek Bailey playing, as I'm sure you all have realised. Certain stylistic features do not a coherent representation make. Why doesn't the 'author' of this guff make himself transparent. You're not Bailey, mate, so get real.Why have you done this, Mr. Faith-in-Fakes?


Sorry, I don't want to be too trainspotty, but why no shots of Bailey's face? Having seen Bailey on numerous occasions, I don't think these are his hands. Fingers aren't long enough for a start. More to the point, whoever this is has some of Bailey's more obvious techniques down pat, but he doesn't have the master's grits and gravy. It meanders and has no dynamic. Clever pastiche, however

At home with Eric

Eric lives in a sort-of Moorish house, deep in the Surrey countryside. There was no answer to repeated doorbell ringing. Entering the house from the terrace on the other side, we halloed. A cat, dozing in the sun, looked annoyed. Down to the swimming pool with its 12-foot-long guitar-in-tiles on the pool floor; no-one there either. Checked the library. A tennis shoe on a table, sunglasses on the couch, a kodacolor of his parents on the end table, gold records on the wall for ‘Disraeli Gears,’ ‘Goodbye,’ ‘Best of Cream,’ the single “Sunshine of Your Love” and both a platinum and gold record for ‘Wheels of Fire.’ Picked one of a large selection of books on the silent screen and settled down in the after-the-bomb stillness. The only interruption was the sudden jangling of the phone. It was Eric’s mother. She wanted to wish him well on the start of his tour. An hour later, Eric came stumbling downstairs in robe and slippers, looking sleepy and abashed. A cup of tea, he changed into his jeans and we went out to the garden to talk.

From the 15th October 1970 edition of Rolling Stone.