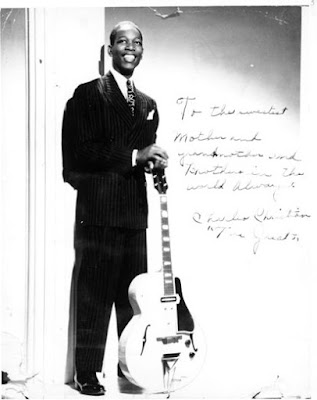 Barney, a constant poll winner, was gracious enough to answer our questions, frankly, and at great length. An interview by mail is hardly the best kind of interview, but, when an interviewee takes the trouble Barney obviously has, it makes such  an interview extremely provocative and revealing. We think you'll find Barney's comments highly candid and interesting.

Q: We've often heard of the importance Charlie Christian has played in the evolution of modern jazz guitar playing. What, specifically, has he done"!

A:Many people believe that Charlie Christian was the first man to play an amplified guitar; others, that he was the first to play horn-like jazz. (Jazz which was styled close to patterns being played by such musicians as Eldridge, Hawkins, Goodman, Chu Berry,  Berrigan etc., rather than following along in the more guitaristic approach such as demonstrated by Carl Kress, Dick McDonough, George Van Eps, Allen Reuss, and Eddie Lang).Actually, both beliefs are incorrect; however, Christian was the first guitarist to  play horn-like jazz not only well enough to play in the company of first-rate horn players, but was inventive to such a degree as to be a model for many horn players  as well as guitarists.

Up until Christian's time, the guitarists who played jazz lines like a horn rather than guitaristically, were still not up to playing as soloists with the horn players. Charlie Christian combined his natural creative talent with influences of horn players of his day (of which, Lester Young was the dominant one), and blazed a trail for every guitarist in jazz, who has followed after him.

Barney Kessel many years later, at the BBC, playing a  Gibson ES-350 with a Charlie Christian pickup: