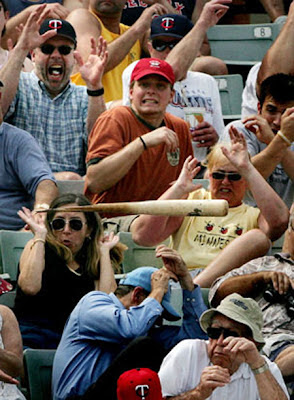 And we're back. Apologies for lengthy break in transmission, but your bloggist has been working on a PhD proposal. I vowed that I would do nothing else until I had finished it and now I have done so. It is about Architectural History; I might post it if the Art History Department at the University of Auckland accepts it.

So, what has been happening? Not a lot. Immediately after I posted a thing about the exciting new alliance of Brian Tamaki and Gordon Copeland, the latter departed. So much for the Christian party. That other Christian Gentleman, Taito Philip Field, is still innocent until proven guilty; he was telling us as much in Parliament only the other day. And we lost Le Rugby.

This is not a sporting blog, as you know. But I was taken with the near-identical headlines on the front pages of the Dom Post and the Herald. "DEJA VU," shouted the Dom Post, while the Herald, never given to brevity, had "DEJA VU AGAIN AND AGAIN." Of course, it was nothing of the kind; deja vu is the delusion that one has previously experienced an event; the inability of the All Blacks to win the World Cup is painfully real.

We are now in a period of national mourning and blaming the ref, although one All Black, like the Engergizer Bunny, keeps on going: Doug Howlett has converted a room at the Heathrow Hilton and tackled two cars. This will give Campbell Live something to talk about, now that its schedules are unexpectedly bare.

At least we will not have to endure those advertisements any longer. I think I am now fully aware that Air New Zealand and many other corporate sponsors are Proud (yes, Proud) to support the All Blacks, that Weet-Bix is the breakfast cereal of choice among Our Boys and that Mastercard does something or other for them. Now we can return to normal scheduling, where only about half the advertisements on television feature the Squad. I am not a sporting type, but I suggest the reason for the All Blacks' failure at the football may have something to do with the amount of time they spend on sets, under-acting.

That's enough sport. I shall now return to the emails and comments that have accumulated during my absence. I will report back soon.
Posted by Paul at 12:53 pm

Welcome back Paul, you were missed.


I can't even think of which rugby match you are referring too!

Indeed, the fault is compounded by leaving us with the image of an empty, ugly room to contemplate when checking to see if there was any life here.

And me having just sent an email begging for an update... good to see you're back in business here!

I suppose you're as thrilled as I am about the Auckland mayoralty result?

Here's a wee bit of madness if you're missing some
http://nzconservative.blogspot.com/2007/10/nzs-first-openly-lesbian-major.html

Yes, it seems that if Field is found guilty, he is likely to be gaoled. The Thai tiler (does he wear a tie?) may also sue successfully for the 6-figure sum that has been publicised.

If Field is found innocent, he may become co-leader of the FutureNZ or whatever Christian political party.

I would recommend to Philip that he plead guilty, if he wants the lesser of the two "evils"!

And it's deja vu with the fundies as well. Richard Lewis and the Family Party.

Plus petrol-head Paul Adams in the mix. He will need to learn how to pronounce Mangere if he is serious about engaging with that electorate.

Don't do a PhD!! They are horrible. I very much regret the years of my life I lost to doing mine.

You appear to be letting your PhD get in the way of your blogging. Most disappointing.