Do you want your coffee straight or ex-gay? 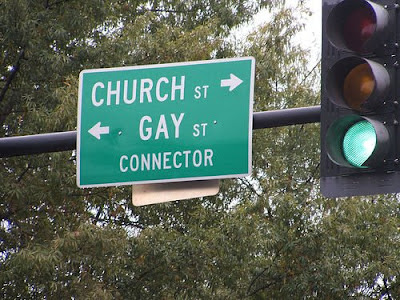 Following Craig's discoveries about Gloria Jean's and Mercy Ministries, I was intending to write a serious picece about the fundamentalist attitude to women and homosexuality. But then I followed the link Craig sent me to an article by Ruth Pollard in the Sydney Morning Herald. And then I saw the photograph there of Sy Rogers, an "ex-gay" Christian. And then I was felled by the quiet comic genius of the sub-editor who captioned the photo "Sy Rogers ... no longer gay."

I know one shouldn't hold to stereotypes, I know that gay people come in all shapes and sizes and I know enough gay people to avoid making any assumptions based on appearance but, all that considered, it would be difficult to look any more gay than Sy Rogers. He might have "reformed" and married a woman, but his God-given gayness remains.

And its not just Sy. Remember Ted Haggard, the Pastor who was disgraced by the revelations of a male prostitute; Ted who took a cure and within ninety days became completely heterosexual? Just look at the photos.

Whilst we are on the subject, consider the story of the ex-ex-gay who found he couldn't leave. Again, look at the photo.

Just in case this nonsense takes hold in New Zealand, here are some resources from The Southern Poverty Law Center, from Ex-Gay Watch and from Truth Wins Out.
Posted by Paul at 12:26 am

Thanks for the kind words mon frere, but really, most of the credit has to go to the Sydney Morning Herald, which broke the story.

Mercy Ministries does have one residential house, in Albany Akld, but apparently no corporate sponsors. In the meantime, though, I suggest that sympathetic secularist readers might want to lobby TV3 to suspend their broadcasts of Hillsong Television from Oz, pending a full NSW inquiry
into this organisation and its activities.

And is also now on the NZ Fairfax
Stuff.co.nz website...sans the Kiwi connection...

I'm not an ex-gay, too busy being a sex-gay

Phew. There's a fascinating debate going on around the Mercy Ministries Sydney operation, and what was going on in Australia...

Sorry- that's on my blog, Proclamations of the Red Queen over at Gaynz.Com