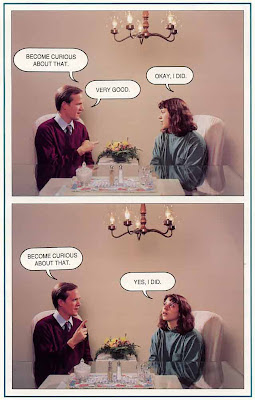 This image comes from the Scientology Handbook and apparently represents an essential part of Scientology training, which will soon be happening at the building now occupied by Whitecliffe College of Art. I would love to know what she will become curious about next; perhaps it will be "why am I wearing a strait-jacket," or "you're really quite creepy, aren't you?"

On the other hand, she might be thinking "why don't I give up this crap and become Anonymous; at least I would get to wear a suit and a mask."

You see, the people who call themselves Anonymous are more than a little bit annoyed by the Church of Scientology, ever since the CoS tried to stop people seeing a scientology video showing Tom Cruise being mad. Anonymous has been protesting against Scientology worldwide, including in New Zealand. Unfortunately, the first local protest was not very well-attended and has become known globally as the Epic New Zealand Fail. But a couple of weekends ago, Anonymous New Zealand made up for it by participating in the second global protest, with an enthusiastic demonstrations in downtown Auckland and elsewhere. I understand the next protest will be on 12th April.

The beauty of these protests is that the CoS cannot find anyone to sue. In the past, the CoS set its lawyers on anyone who investigated Scientology or criticised its practices. But Anonymous is anonymous. There is no membership or organisation, just some websites where Anonymous lurks, anonymously. The Rules of Internet prevent me from naming these sites, but I can reveal they are of the wiki or imageboard kind, where users can post or modify content anonymously. It is in these places that the word is spread about demonstrations and other actions against Scientology.

The CoS tried, in a Florida court, to obtain an injunction against Anonymous by filing a Petition against twenty-six individuals "alleged to be associating as a group referred to as Anonymous." The court noted that the Petition contained "no specific allegations of wrongdoing against the individuals named as respondents" and denied the Petition because there was "no allegation of the existence of any organisation or hierarchy of command that exercises any form of collective or coordinated action that results in the systematic deprivation of the Petitioner's rights." In short, the CoS tried to stop all actions against it made by people identifying themselves as Anonymous but failed. In shorter still: they fought the lulz but the lulz won.

The CoS has every reason to be worried about Anonymous. Deprived of its main weapon of legal action, it is helpless. Worse still for the "Church," Anonymous has created a new generation of opponents, people who otherwise would never have known about CoS. Of course, the CoS will bleat about freedom of religion and whine that it is being oppressed but such tactics are standard operating procedure: the Scientology organisation calls itself a church for two reasons - tax breaks and special privileges.

In turn, Anonymous has every reason to be worried about New Zealand. We are one of the few countries in the grown-up world which recognises Scientology as a religion for tax purposes. Of course, in the not so humble opinion of this blogeur, no religion should get tax breaks - religions are no different from private clubs and religion is not in itself a public good that should be rewarded. That said, it is particularly galling that the bunch of crooks calling themselves the Church of Scientology get tax breaks for doing their dirty work. Their income, which is derived from acts of deceit, is not subject to tax. No wonder they can afford to buy Whitecliffe.

In case any fair-minded, decent, liberal reader (I believe there are some) is choking on his pancetta after reading my description of the CoS as a bunch of crooks, let me explain. Everything the CoS does is designed to increase revenue. The CoS deceives its members in order to get their money. Most members are duped into joining CoS by taking the E-Meter test. The E-Meter (the current version is the Mark Super VII Quantum E-Meter) is supposed to measure one's mental health (to be precise, it is supposed to detect the Thetans on one's body, but the CoS does not tell an adherent about the Thetans - the spirits of aliens brought to this planet by Xenu - until the member is well and truly caught up in the con). It is inevitable that the person taking an E-Meter test for the first time will fail it and so will require a course of treatment, which of course will cost money.

The E-meter is nothing more than a wheatstone bridge - it measures the electrical resistance of the subject's body. So, when the CoS offers you a "stress test" (which you will fail) it is duping you to get your money - a criminal act. The money it raises from this crime, and the many others it commits in the form of courses for members, is tax-free in New Zealand. This is the true Epic New Zealand Fail - a crime syndicate fooled the tax authorities of a nation into believing it was a religion.
Posted by Paul at 2:13 pm

All you've done is regurgitate, without much sourcing, lies and gossip you read on other people's disreputable blogs and websites. Why don't you put your bitterness aside and try to learn what Scientology is really doing to help the planet? We'd love to have you lend a hand.

You people are quick - that comment came within fifteen minutes of my posting.

All I can say is Lisa McPherson.

How many of the little buggers are there? I seem to recall there only being one Scientologist church, based in Auckland.

Paul, how is "all I can say is Lisa McPherson" a meaningful comment? Even if all the horror stories told on the net about Lisa's death were true - and they most certainly are not - it only speaks badly of the 2 or 3 people who were supposed to care for her in Florida, not the Church as a whole. Invoking Lisa's name like a robotic parrot doesn't really foster an intelligent discussion. The Scn-haters love to make it seem like all Scientologists everywhere are responsible for one woman's death. And then they try to amplify the whole thing as much as possible, to use for their "Scientology Kills!" campfire spook story.

(I've been a Scientologist for years and they haven't killed me yet! I worry way more about being killed by a Guy-Fawkes-mask-wearing psychopath)

Anonymous said, [i]"Paul, how is [/i]"all I can say is Lisa McPherson" a meaningful comment?[i] Even if all the horror stories told on the net about Lisa's death were true - and they most certainly are not - it only speaks badly of the 2 or 3 people who were supposed to care for her in Florida, not the Church as a whole.[/i]
Lisa McPherson (1995) = Martine Boublil (2008)


Police in Italy have rescued a French woman held hostage by a group of Scientologists in Italy. Found partly nude, on a bug-infested mattress in unsanitary conditions, the woman, who suffers from major depression, was the subject of a Scientologist process called the "Introspection Rundown". She needed hospitalisation for several weeks before she could be repatriated to France, from which she was initially kidnapped.

Gracious said...
This comment has been removed by the author.
4:48 pm

Anonymous 3:31 said, (I've been a Scientologist for years and they haven't killed me yet! I worry way more about being killed by a Guy-Fawkes-mask-wearing psychopath)

Don't worry, Scientologist, we are from the internet. We have come to help.

I can haz internet hate machine ?

On a more serious note: were scientology just a new bunch of religious pantomime art then fine, its adherents can go over and live in their little corners and we with our open access to their doctrines will feel free to criticise them and debate openly.

However the fact that scientology's theological basis is aggressively and oppressively defended from any scrutiny and the church as an organisation is an extremely vindictive beast makes it a body that is going to be held up to a much higher level of scrutiny. Lets face it, you're not doing yourself any favours with your behaviour.

Oh dear Paul you have done it now, your little spat with the Rationalists will be as nothing now, Anonymous has you pegged, the lawyers can't be far behind.

I have never understood why people go for Scientology, after all it is surely much cheaper to have 'Gullible Idiot' tattooed on your forehead.

Well, it will be interesting to see what fallout occurs from this outside this comment thread. I find I keep checking back here every few hours to see if a conflagration has started.

Some munted sense of pride stirs within me.

In the vein of demented scientologists (a redundant term, surely) here is a wonderful parody of Tom Cruise from the upcoming Superhero movie...

Scientology is a particularly exploitative religion, there's no doubt. But the scientologists' beliefs are hardly any more ridiculous than those of christians, muslims or jews. They are, indeed, all equally ridiculous, and all equally undeserving of tax exemptions.

And besides, 4chan is every bit as fucked up as L. Ron's cult.

4chan may be fucked but its free.

"But the scientologists' beliefs are hardly any more ridiculous than those of christians, muslims or jews."

Can't find the exact quote from South Park but:

At one point, one of the kids calls the Super Adventure Club's central message "retarded," and the club's leader asks, and I'm paraphrasing (a lot), "Is it any more retarded than the son of God coming to Earth to save us, or a Buddhist sitting in a tree for 20 years?" And one of the kids responds: "Yes, it's way, way more retarded."

Also, there's a vast difference between a simple creed of faith that people apply to their own lives, and one which obliges you to pay money to discover.

While people are free to do what they like, most churches act as voluntary charities. The CoS is a business, and therefore one could argue should be subject to the same consumer laws as other businesses, including fraud laws.

I'm sure I'm not the first to think of this, but if the e-meter is being used putatively as a diagnostic device, then is there not law to say that it must meet various standards?

The regulation of medical devices in NZ is not very tight, but there are some rules and agencies to whom you can appeal. For example, it would be interesting to know whether e meters comply with regulation NZECP-12 under the New Zealand Electrical Code of Practice

I think that NZ uses the Australian legal definition of a medical device. Which includes two promising bits:

- preventing, diagnosing, curing or alleviating a disease, ailment, defect or injury in persons or animals;

If a device is legally a medical device, then it has to have ISO standards and all sorts of stuff. It could cause, at the minimum, bureaucratic annoyance if someone were to enforce this for the gadgets used by Scientologists.

But what an excellent thought.

Hmmm. Has anyone contacted MedSafe about this? It's probably the appropriate regulatory agency...

Why are you telling me this?