Bruce Logan is risen from the grave 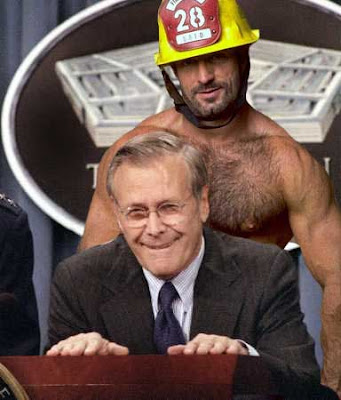 It is all very well you having your human rights but, mark my words, it will lead to sodomy (it's alright; it's Safe For Work, honest it is; just click that link; you know you want to). So says Dr Muriel Newman, whose brief history of Human Rights takes the reader on a breathtaking ride from the last stop before the Finland Station to the Rainbow Room of the New Zealand Parliament. Sorry, is it just me or is it really (a) cheap and (b) nasty to exploit the natural homophobia of your readership to get their attention?

And what is this "human rights movement" of which Dr Newman speaks? Was there some Vast Liberal Conspiracy that demanded and got Human Rights for the Homosexualists? Or did the gays themselves go out and themselves the simple right to not face criminal charges for acts of consensual sex? And let us not forget, while we are at it that the Homosexual Law Reform Act was passed into Law only in 1986, which was not long ago: the year of the Pet Shop Boys' West End Girls, Europe's The Final Countdown (sorry Sam, sorry everyone, for the earworm) and Swing Out Sister's Breakout.

And what exactly is Dr Newman's point? Well it is this: apparently there are two forms of Human Rights, the Anglo-American kind and the Continental sort. The rugged, manly Anglo-American notion of Rights is about ensuring that people of money remain rich. The cowardly, snivelling Continental strain is about such fripperies as education, welfare, pensions, health care, public housing and the like. These are all well and good but can lead to Socialist Capture (oh capture me, you Swedish Model, you).

And it is not just the pooftahs who benefit from these Rights. It is also the Wimmins: "who could have imagined, for example, that those early calls for an end to discrimination against women would have resulted in feminists successfully undermining marriage and the family, not to mention marginalising boys and men." Ah well, at least those marginalised boys and men can do gay things without being arrested.

But read on further and you find that Dr Newman's intent is more evil still: she has put Bruce Logan back together and look, he walks! The celebrated word thief is risen from the grave and hark, he still prattles on about the United Nations. Not that he makes much sense – "Human rights are derivative they are not foundational – but at least he is using his own words.

Craig has more to say about Mr Logan.

Dr Newman must be running out of guest commentators. Bruce Logan "walks"? Surely you mean he walked? His guest commentary is a retread. She calls him "this week's NZCPR Guest Commentator", but his "opinion piece" is dated 27 October 07!

Ah- does that mean that (a) Mad Moo can't run her website properly (b) Logan is still on holiday in the Mediterranean? Or (c) both?

And my compliments on the splendid specimen of manhood behind Donald Rumsfeld. Incidentally, have you spotted the neocon Battlestar Galactica pisstake on Youtube yet?

The nutters are at it again: