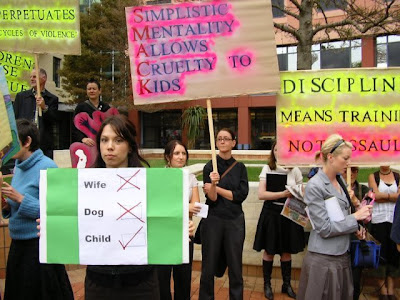 Span has linked to my link about the S59 protests and is now hosting a discussion on repeal. I am linking back in a great circle of link.

Meanwhile PC also has photographs of the protests, including one of the same holder of a really good placard whom I had featured and her fellow protesters, whom he refers to as "plain Janes".

Now, as it turns out, I was writing a piece on Objectivist Aesthetics; really, I was. My thesis will now have to be revised. It seems that PC would prefer to see photographs of Lindsay Perigo (wearing a shirt that says "politically incorrect" when "morbidly obese" would be more appropriate) to a woman in the upper quartile of attractiveness (trust me, I am an Aesthetician) and her not unbecoming sisters.

This worries me. I had thought that Objectivists had a standard of beauty. I now realise how wrong I was.
Posted by Paul at 3:43 pm

You need to try dripfeeding this stuff out unless it's extra-perishable scoop material - as great as it is to have so much to enjoy I wouldn't mind seeing them day by day...

PS: More muck no doubt to be raked concerning the 'authorities' cited in today's Garth George column, but I'll leave it to the pros!

Outstanding post. Not PC is in the upper quartile of annoying-ness.

btw, what is it with Not PC's brand of Randian libertarianism? He hates creationists (because they're just dead wrong), but he's a global warming sceptic? WTF!?

Is it because belief in evolution costs nothing, whereas acknowledging AGW would require -- gasp! -- state intervention?

Samuel, thank you. I will try to be less of a fast and binge blogger.

Mr WTF, thank you as well. I find this libertarian climate scepticism rather hard to understand. Is it that they just like large corporations having freedom to do whatever they want?

If I was at Getty Images, I'd file the Lindsay Perigo picture at the childbeaters march on Scoop as a generic picture usable for stories on child abusers. He certainly looks like somebody I would never send my children to for Sunday School.

The Libertarianz reputation has been destroyed - or exposed - by this.

They put themselves over as lofty thinkers, irreverent rebels, but the reality is that they have a warm chair waiting for them with the nutjob fundy right - where they fit right in.

According to the Manawatu Standard, one Baba Perigo defied the bigots in Fielding. Word has it she's Linz's mum- and she *supports* the Bradford Bill!!!

I feel sure that Baba is not completely Gaga too!

Some light reading for you all:

A new Issue Analysis by Professor Peter Saunders from the Centre for Independent Studies critiques the ever-increasing size of government in New Zealand, fuelled largely by an inexorable rise in welfare spending. Most of this rise is driven by 'churning', that is, by government taking tax so that it can give it back to the same people who paid it, in the form of benefits and services. Churning has undesirable economic effects like inefficiency and the creation of bad incentives. It also limits people's ability to make choices for themselves and undermines personal responsibility and community ties. The report recommends three major policy changes to reduce 'tax-welfare churning while still ensuring that everyone is guaranteed a decent, basic level of provision': a tax exemption for income below the minimum subsistence level; personal savings accounts for all workers to take the place of government assistance in times of sickness or unemployment; and options to opt out of the government health and superannuation schemes in return for tax reductions.

Thanks for the virtuous circle Paul :-) I'm getting a lot of click throughs from here and it is certainly much appreciated!

Why is it that when a woman is holding a political view that someone finds disagreeable they think it is open slather to comment on that woman's appearance, rather than debate the issue? How is it relevant? Very disappointing approach from PC.

Shout Above The Noise said...

So Littericks comment about Perigo being 'morbidly obese' is OK then ?

Hyperbole, dear boy. Obviously he is not morbidly obese but he should think about his dress sense.

Span is right: women in politics are constantly spoken of in terms of their appearance, the Prime Minister especially. The PM not having children also is often mentioned. We ought by now to be able to judge female politicians by their political actions rather than by dated womenly virtues.

Well, I'm gay, so is Linz, and I found him profoundly aesthetically challenged from a formalist perspective...