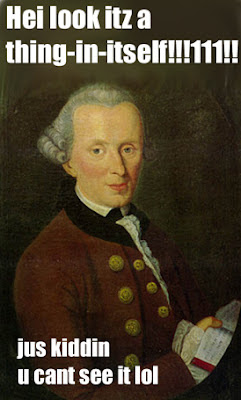 And we're back. I am emerging briefly, from the mess of architectural aesthetics I have got myself into, to answer readers' queries.

For all this talk of Kant and Eliot, the most crucial issue seems to be Martha and the Muffins. Southern Dave has been downloading while Peter from Jute City has been nostalaging about The Associates (soon, Peter, we shall have Scottish Music Month).

Meanwhile, Matthew Flannagan takes me to task about Kant. To clarify, I fully accept that Kant was a forerunner to Post Modernism; but then, Kant was a forerunner to everything. What I do not accept is Maxim's confusion of Kant and Nietzsche with PoMo and their suggestion that Rorty was a Post Modernist himself. However, I do agree with Mr Flannagan about Plato and Socrates. Having suffered more of Dr Cooke's sermons on Humanism than most, I can only conclude that everything Dr Cooke says about Philosophy is bollocks; quite a few members of the New Zealand Association of Rationalists and Humanists (Inc) would agree with me. Some time back, I realised that Dr Cooke's views on Philosophy amounted to the following:Anyway, back to important matters: Martha and her Muffins are still here; for those who have missed out on their last three decades, an update is available here. Apparently, for those that care, Martha Ladly of the aforementioned Muffins suggested the title Architecture and Morality to OMD for their album, said title being taken from a book by David Watkin, who was to have been my PhD supervisor at Cambridge and whose books I am now re-reading for my proposed PhD at Auckland.

It is all a vast circle of something (or other).
Posted by Paul at 6:58 pm

Given your clarifications I do not think there is a serious disagreement between us. Though I doubt this point can be trivialized by claiming that Kant is a forerunner to “everything”. I doubt one could call him a forerunner of utilitarianism for example and Kant did claim to be deliberately setting of a Copernican revolution suggesting that human cognition structured the phenomenal world and the world as it was in and of itself was unknowable. I also agree with you that Maxim get it wrong by suggesting Kant was a post modernist. I have heard Maxim get confused about Kant before. (Mind you, if you’ve read the Critique it’s not hard to see why a person would get confused.)

We probably agree also on Bill Cooke (I had a public debate with Bill in 2002 so I am familiar with his tactics). I was surprised that he thought Plato and Socrates were “humanists” in his sense of the word. In the Laws Plato advocated executing atheists and imprisoning them and Socrates vision of society in the Republic is hardly the “open society” Bill appears to go on about.

I am surprised that Bill has the attitude towards Kant you say he does. Given I have heard him twice in debate push the (fairly discredited now) claim that the arguments for the existence of God were all refuted by Kant and Hume. I though he might have held to the common view (currently being challenged by people like John Hare at Yale) that Kant is a kind of secularist who simply feigned religion to escape censorship.

It’s not Mr. Flannagan it's Dr Flannagan. If you are going to refer to Bill in your posts as Dr Cooke then I request you show me the same respect. I don’t mind people addressing me causal, but if everyone else is addressed in a formal manner then I should be too.