Have yourself a very Fascist Christmas

One of my favourite traditions at this time of year is the War Against Christmas. Like many traditions, it is not that old: the religious right in the USofA discovered that Christmas was under attack from secularists only a couple of yuletides ago. However, hostilities have broken out all over the place, including the Old Country. A Member of Parliament called Pritchard, who represents the Conservative interest in the Wrekin, has taken up the call to arms. Apparently, "many shoppers find it increasingly difficult to buy greeting cards with references to Christ." It is obvious why: the fascists have bought them all. Mr Pritchard says the British National Party in Staffordshire has sent out cards showing the holy family and bearing the words 'heritage, tradition and culture.' I am so glad I am not on their list, or any of their lists.

Things are so different in the Levant. Mr Pritchard told his audience, "yesterday I received an e-mail from a Jewish gentleman in Beirut, who told me of nativity plays performed in schools there. If it is good enough for Lebanon, it is good enough for London." I should think so, too. London should have an endless war between Christians and Muslims, with help from Syria and Israel. That would give the youth of today some moral fibre. Instead, they have Amy Winehouse, who is Jewish but no gentleman (incidentally, on Waiheke Island recently, I saw a teenage girl who looked like Ms Winehouse and who had styled her hair accordingly; I bet she is a worry to her parents).

The full text of Mr Pritchard's speech can be found here. It is a masterpiece of imagery. He exalts his fellow members to "slay the dragon of political correctness" and provides what must be the simile of the year: "taking Christ out of Christmas is like serving the Christmas turkey without the stuffing."

Mr Pritchard also has stern words for us heathens: "turning to secularists, it is wrong of the anti-Christian lobby, whether atheistic, humanist or secularist, not to afford the level of tolerance to the Christian faith that they rightly demand for their own world view and beliefs or lack of belief." I must say, it is very nice of him to be so politically correct as to distinguish between the different kinds of non-believer. But I don't think atheists can be blamed for the rarity of advent calendars.

Whilst we are at it, and thinking of war, why did none of these crusaders ever complain about the war films shown on television at Christmas? When I was growing up in England, on Christmas Day the BBC would always show Von Ryan's Express or The Guns of Navarone. It is no wonder that the only people left who care about the reason for the season are the Staffordshire fascists: the holy family keeps folks' minds off killing Nazis.

Dispatches from the war against Christmas in the USofA can be found here, while Flumadiddle brings us the true tat of Christmas. And, in case you didn't know already, it was all invented by Charles Dickens.

Finally, and thinking of the Wrekin, here is a unrelated song from Wreckless Eric

One more thing: here is my Christmas card to you. I hope you will find it tolerant and secular. 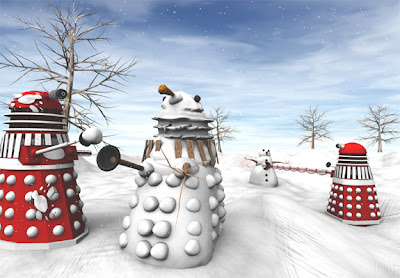 What a sick , sad case study in madness you are . How pathetic you are , you stupid foolish twisted nutbar !!

Was it the daleks?

The atheistic Communism advocated by the USSR was one of the greatest failures of humanity.

That would be it - atheistic communism, communistic atheism, aesthetic communitarianism, a day in the life, a life in a day.

Prime also Daleks on it, and they were trying to exterminate Santa and Rudolph the Red Nosed Reindeer.

One wonders if they were similarly targeting Nativity scenes...

It must be really hard to belong to an oppressed minority like what Christians apparently are in the US or UK.

Christian Taliban... "Kiwi's want s59"... IQ is either genuinely below 59 or suppressed by the usual self-induced brainwashing.