Don't bore us, get to the discourse

On Thursday morning while having a chat with Kelvin Soh at Alleluya, the fire alarm goes off and we're all ushered outside. Kelvin mentions that he has always wanted to be involved in a fire evacuation. Earlier on, when I first meet up with Kelvin he is holding a triangular postage box. I find this box incredibly nice to look at. We have a conversation about the box, about how I've never see such a box in Australia. Later on that day I send an email to Kelvin:

Now read on. Apropos my previous post, Mr Charlie Sofo has published the text of his exhibit at Artspace, a text that includes a chat with  Kelvin who never has been involved in a fire evacuation - a remarkably sheltered life.

Mr Sofo likes chats. As you will see from the comments on my previous post, Mr Sofo wanted to have a chat with me, with the hope that it might correct the bad information. I declined. I do not like chats, not of that sort.  It would have been the sort of chat you might have with your headmaster, rather than the sort you might have with Kelvin. What happens in this sort of chat is that someone like Mr Sofo tells someone like me that he is wrong, that he has the bad information. I would resist such a line of chat because in this particular case there is no information, only opinion.

A lot of contemporary artists and curators seem to have difficulty with the idea of opinion, perhaps because their work is never criticised. Contemporary art journals no longer contain criticism of the kind that says this is good, that is bad and that is throwing a pot of paint in the public's face (a comment which cost Ruskin a farthing). What you get instead is  interpretation, in which a critic will tell you what it is all about, at least by the critic's lights. In other words, you get artwank.

The domination of artwank (or, as it is known among the artwankers, critical discourse) has brought us to this pretty pass: 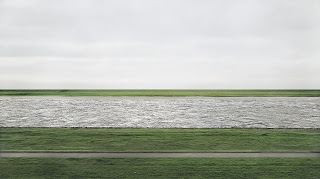 This, gentle readers, is the world's most expensive photograph. Yes, I know. Four point three million dollars US, that's what it cost; and it is not even unique: it is one of an edition of six. You might think it  the sort of photograph your mum would take. But nobody is asking you. Nobody is asking me either but, for the record, I think it is not that bad but not that good and certainly not worth that kind of coin.

So what's it all about then? Christie's says it is "a dramatic and profound reflection on human existence and our relationship to nature on the cusp of the 21st century." But they would say that, wouldn't they? They might also say it is a nice little earner.  And, by the way,  it has been shooped:


Gursky digitally erased buildings on the far side of the river from his picture. This manipulation enhances the image visually, giving it more formal coherence. Rather than the sense of a specific place, the picture conveys an almost Platonic ideal of a body of water traversing as landscape. Gursky talks about this image in terms of its contemporaneity, saying, ‘I wasn’t interested in an unusual, possibly picturesque view of the Rhine, but in the most contemporary possible view of it. Paradoxically, this view of the Rhine cannot be obtained in situ; a fictitious construction was required to provide an accurate image of a modern river’

Bet your mum couldn't do that. Or say that - the art of art is talking the talk. Gursky is good at that. Behind him is a legion of artwankers who will promote him in similar or more abstruse terms.  But there is nobody who says this sort of work is not very interesting, not that good,  not worth the money. And that absence distorts art, it allows the artwankers to do what they want without any reference to the rest of us. It leads to aimless exhibits like Mr Sofo's and to obscenely expensive photos like Herr Gursky's.

What we need are a few more Ruskins (a few Whistlers wouldn't go amiss, either). We need to hear a little less of that guff about art being challenging to the viewer (anybody who has been to an opening will know that the professionals are not challenged by art, especially when they have had a few glasses of Merlot) and a bit more challenge to the artist. We need a whole lot of discourse going on.