I'm on a wharf 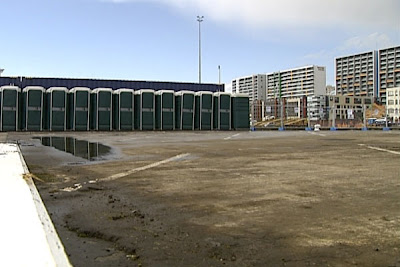 No, I am not. I was on a wharf but I did not stay. I went to Captain Cook Wharf, the Official Overflow Wharf for the Official Fanzone Wharf, which is not to be called Party Central, no sir. It works like this: when everybody wants to get on to Queen's Wharf because everything is happening there but cannot because the wharf is not big enough for everybody, the authorities open Captain Cook Wharf. This solves crowd problems immediately.

I can report to you that Captain Cook Wharf is a very big wharf. In its present configuration as an overflow partyzone it contains four sorts of thing. These are a big screen, some piecarts, many portaloos and an infinite number of barriers. And that is it. There is nowhere to sit, nowhere to buy the Official Piss of Rugby World Cup 2011, nowhere to run baby, nowhere to hide.
You arrive. You pass through corridors of barriers. Your bags are checked by people in flouro to ensure you are not carrying any unauthorised item such as a gun or a Steinlager. A woman hands you a leaflet. It is too dark to read the leaflet. You buy cholesterol products from the pie carts and you stand in front of the big screen. If you are feeling adventurous you sit on the concrete. It is dark, apart from the security lights, which give a gulag archipelago tone to the evening. It is cold.
After a short while, you realise that all sense of purpose to your life is ebbing away. Besides, you no longer have any sensation in your genitals. You turn to leave. You pass the pie-carts. You reach the entrance. A man in flouro says that the way to the exit is back where you came from and round in a loop. You can see that this journey will take you to a point beside you and the man in flouro, a point you could reach in less than ten seconds by walking forward. But you have lost all will to resist. You go back. You go round; in a loop.
Back on the street, you find more portaloos. Thousands of these things are standing in lines all over the Queen's Wharf Demarcation Zone, or whatever it is called. It is like Checkpoint Charlie for the incontinent. Barriers, security people, women with leaftlets, portaloos: that is all there is to be seen. And yet nobody uses the portaloos. From my own experience, I can tell you that in my life I have never wanted to pee less. The feeling that one will be watched, prohibited or handed a leaflet removes any desire to do anything. The comforting realisation that one is still alive is balanced perfectly by the dreadful sense that everything around is entirely devoid of life. This place is Limbo, with lavatories.
The people around you, the teeming hoards of people trying to get into the other wharf, make many noises, none of which sound like speech. They seem to be shouting in a language that is beyond words, an esperanto for the young, witless and pissed.
So you run, back to the safety and calm of Queen Street. You run past the worst covers band you have ever heard, one of the nouveaux pasticheurs, those musicians who do not bother to learn the tunes of Hotel California, Sweet Home Alabama and the other songs they slaughter but just play the same chords in differing tempi. You run past numerous gangs of marauding evangelicals, refusing their tracts and their prayers. You run past the somnolent masses of members of the glue-sniffing community. You run past fifty kebab shops and then you wake up and it was all a dream.
That last bit wasn't true. It is all horribly real. If it rains, it will be even worse.
Posted by Paul at 8:39 pm

If I were a member of the hat-wearing community, I would doff mine.

I love a good human sacrifice. This was a great one. Top writing.

Classic. I had a feeling it would be like that. When there's a whole city to overflow into, why would I choose that place? There's like 200 bars/restaurants within the same distance.

If you have a family and would like to visit the downtown area during the Cup, then you may have little choice but be herded here. I don't want to take young children to a bar. And, yes, this alternative sounds dreadful.

I was on Captain Cook wharf on Saturday eveing. We watched the first half of ABs v France there, and in the immortal words of Wayne - it definitely did suck.
Ben - we wandered off at half time and easily found an infinitely more convivial location in one of the bar/restaurants within, as you say, the same distance.