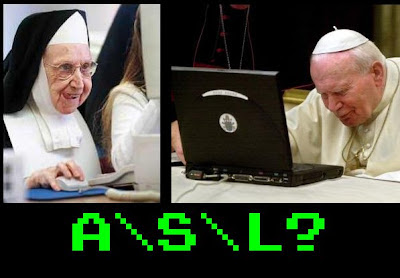 If I were a girl and I wanted to be a Riot Grrrl, I couldn't think of a better pseudonym than Susan Apathy. It would be post-punk perfection. But I am not a girl and will never be a Riot Grrrl. Besides, the name is already taken: oddly enough it belongs to the Deputy Chief Executive of the Catholic Education Office.

Ms Apathy was in the news this weekend for some encouraging news: the Catholic Church in New Zealand is running out of priests and nuns. Ms Apathy has a solution, an old favourite of the Catholics: get them while they are young. "Young people are at their most idealistic in their mid to late teens," says Ms Apathy; she is encouraging Catholic schools to recruit for the Vocations.

Nothing new here, I am sure you will agree. But it is worth noting here that we are paying for these Catholic schools. Under a thoroughly dirty deal done by that nice Mr Kirk with the Catholics in 1974, the priests and nuns get to run their schools more or less as they please and we get to pay for them. The other denominations have also got into this act and so we also pay for Anglican, Presbyterian, Muslim and Hare Krishna schools, as well as a whole bunch of fundy schools and one run according to the cod philosophy of Rudolf Steiner.

You will of course have seen Mr Finnemore's post on the subject of integrated schools; I believe Mr Finnemore himself is the product of a Catholic integrated school. It is worth noting that there are no private Catholic schools in New Zealand: the deal offered by Mr Kirk (give us your votes and we will pay for the rescue of your crumbling schools) was so irresistible that the entire Catholic education system was converted. And it has paid dividends: posh schools like Baradene College of the Sacred Heart and St Peter's College are run on grounds of academic, social and religious discrimination at public expense. In short, it's a middle-class rip-off.

Oh, mate. Love your work, but had to cackle when you referred to Baradene as a posh school. Seriously? Compared to Latin-teaching fully-state-sponsored schools the likes of Auckland Boys' Grammar? It is to laugh.

Although we may have had some decent buildings, St Peter's College could have done with a bit more discrimination in matters academic. AGS had, and has, everything over St Peter's College unless you have that commitment to giving your child a Catholic education.

As a side note: St Peter's College demolished its chapel in 2002 to make way for a courtyard leading to a brand-new technology block. The chapel was replaced with a prefabricated classroom consecrated for the purpose. I remembered Fifth Form History in this room and could never enter with a straight face afterwards.

As of 2008, despite having built a brand-new middle school block, St Peter's College still lacks a purpose built chapel of any kind. I have been watching with amusement for six years now. It's the gift that keeps on giving.

By "posh," I mean infested with rhododendrons. I make no comment about quality of education.

St Peter's has a very nice Warren and Mahoney building right next to the motorway. It has a symbolic cross-shaped thing, which I am sure makes up for the absence of a chapel.

That would indeed be the technology block.

I couldn't tell you if St Peter's really is infested with rhododendrons, because St Peter's obviously produces the kind of young man who wouldn't know a rhododendron if it floored him with an uppercut. This was never a key part of curriculum - unlike rugby or soccer, the key determinants of prefect status and leadership recognition. Pity the poor sucker who thought that concentrating on academic study would mark them out for distinction.

I thought that it was Hon Phil Amos that deserved the "credit" for this farcical situation regarding integrated schools.

Just as funny is the sight of atheist parents, rediscovering Roman Catholic genes, and putting their kids through some sort of confirmation process that they would never prescribe for themselves. Values for sale, literally.

While I think of it Paul, have you seen reference to the recent Bill Cooke debate, against a "Christian Philosopher" named Craig.

Ian Wishart attended the above debate and (true to form) thinks Craig the winner.

But I realised that Cooke was someone you had worked with before and wondered how you thought he would have gone proving that God was a delusion.

One small detail: the St Peter's Technology block is actually by Architectus, but very strongly influenced by W&M I'd say.

I didn't even know most of that stuff. But don't worry - I have many St Peters friends and it is safe to say that they have no fundy morals whatsoever.