The Devil made them do it

As a special treat to you, dear reader, here is a guest post written by no less than Mr Sam Finnemore, the hero of a thousand fights at Ian Wishart's place, as well as Books Editor at Craccum and all-round good chap. 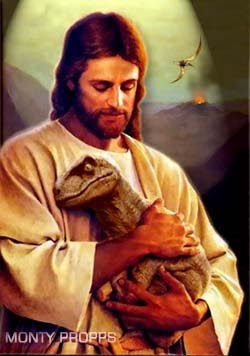 The expression of discontent amongst fundies is not limited to the standard (but now rather rare) major-issue blasts from Family First. The conscientious fundy-watcher keeps an ear to the ground for local rumblings too. And so, I came across an interesting piece in Auckland’s second-best-known free local paper, the Aucklander, on June 4, describing the tensions between ‘God and state’ in integrated schools.

Integrated schools, of course, are what happens when a private school accepts the state school curriculum, and some controls over its roll, in return for a boost in funding and realistic salaries for teachers. It’s usually an arrangement which benefits students and institutions alike. It also happens to be a useful arrangement for religious schools, who get the benefits of the state system for their students along with the maintenance of their ‘special character’.

Well, that’s the idea. As the economic downturn bites, leaving some parents with less cash for private school fees, financial considerations are leading more private schools to consider integration as an answer. The Aucklander cites Kingsway School in Orewa, which integrated in 1998, as one institution happy with the shift. Hebron Christian College in Mount Albert has also just applied to integrate; principal Geoff Matthews says that a desire for “all socioeconomic groups to be able to attend” was part of the motivation behind the move.

But we are not concerned with these well-meaning Christians, but rather with our fundy of the day: Michael Drake, principal of Carey Christian College in Panmure. For Mr. Drake, integration is – yawn, but it’s the only appropriate paraphrase here – a deal with the Devil. “An integrated school has effectively sold itself to the state. You’ve ceased to acknowledge God as your supreme head.” Drake, according to the Aucklander, would rather see Carey Christian College turn students away than strike a bargain with the perfidious Ministry of Education.

Carey College, I hasten to say, isn’t a completely independent outpost from the pagan education system. Students study biology, physics and chemistry from OUP's Cambridge Coordinated Science textbooks , which presumably deal with recent developments in Godless natural philosophy. But this is compensated for by another suggested text, Why I Believe in Creation – ‘not required, [but] a most helpful magazine-format apologetic suitable for all grades’. There are also ‘special helps’ texts, including both a guide to English grammar and Andy McIntosh’s Genesis for Today, ‘an outstanding book [demonstrating] the importance of the doctrine of creation for life and faith, as well as for science and history’.

But the key to the Carey philosophy on integration lies in this remarkable essay by one Doctor Noel Weeks of Sydney University, which warns against:

… a two-pronged government attack upon Christian schools. The first prong is to attack any way in which Christianity may be seen to threaten the tacit government support for personal indulgence. Schools must not by discipline threaten the child’s right to self-determination They must not question teachers’ right to sexual indulgence, the litmus test of which is the right to homosexuality. The second prong is to gain total control of curriculum and enforce whatever complex silliness is dreamt up by a bureaucracy justifying its own existence.

If you are not quite clear on Dr. Weeks’ vision of the Ministry of Education parachuting gay schoolteacher special forces into private schools, á la 1984 classic Red Dawn, there is also this:

Second, we must expect government bureaucratic systems to be corrupt and tyrannical. In spite of what they supposedly aim to achieve, the corruption of the heart subverts the organisation…We have to fight the artificial outcomes which are expected, and the attempt by politicians and bureaucrats to fill the curriculum with junk… The model I have described of personal indulgence coupled with managerialism, is basically what Scripture sees as characteristic of pagan societies: greedy and immoral populace and tyrannical kings. As a society becomes more overtly pagan, it is to be expected that it will show the dynamics of a pagan society. Our call is to recognise that and to resist it.

For now, it seems, the Christian Wolverines of Carey Christian College will carry on fighting the good fight. It almost seems unsporting to tell Mr. Drake that there are indeed many organizations which provide pure, quality Christian education, without any buckling to the needs of the state or to integrating the children of the faithful into ‘pagan’ society. They’re called churches, and they have cornered the market. Schools, being in the business of somewhat broader education, ought to be more open to compromise, if only for their students’ sake. If Carey College persists and survives, well and good. But it’s very possible that Mr. Drake’s vision of a smaller school without compromise might backfire. There often isn’t much left to render unto Caesar when your students are outnumbered by the Apostles.
Posted by Paul at 12:36 am

The roll of Carey College is probably no more than 60 kids.

Do they need a principal?