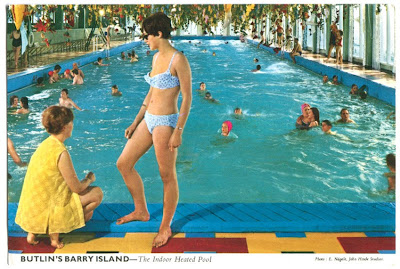 There is a general antipathy to any kind of change in the Lea Valley among psychogeographers. Elsewhere, Self has written that the Olympic Delivery Authority ‘may make compulsory purchases, tarmac over the sports pitches, roust out the travellers’ encampments and tidy the urban detritus under their magic finance carpet, but very quickly it will all come tumbling back, the steely weeds of a city that has defied everything that God, men or even planners can throw at it’. In architecture, in the built environment, Self sees the hubris of mankind.

See, that's where you went wrong, Seb. You thought the Lea Valley would be a safe place to put the Olympics but it turns out to be a nest of psychogeographers. They are all over the place, wandering around, muttering about everything, writing books. Look, here's Self and another one, that Iain Sinclair, on Australian television of all places. Some might say that Olympic Park was put there just to make Sinclair feel even more alienated than usual.  Chris Petit will probably make a film about it.

And here's that Will Self again, on Newsnight.  As we learn here, the Westfield shopping centre that forms the entrance to the Olympics (yes, it is difficult to understate the vulgarity of the people behind this nonsense) will include an academy to train the young to become retail workers, a school for shopgirls.

In scarcely-unrelated news, Eric Hobsbawm's daughter has become a Visiting Professor of Networking at some business school the University of London never knew it needed until every other university started getting one.

Meanwhile, my own alma mater, the Courtauld Institute of Art, is now led by not a mere Director but a Märit Rausing Director. Indeed yes, the job title includes a sponsor's name and the current incumbent is not even an art historian.

And back to the Olympics and back in New Zealand;  the contract for the all-important team formals uniforms was given to middle-management outfitters Rodd and Gunn, manufacturers of comfortable clothing for men of dismal taste, men who imagine themselves trout fishing and taking long walks on the beach with their labradors.

In keeping with the mores of our time, the design was done by a Czech in Australia, who found the material in Italy and had the uniforms run up in Turkey, China and Italy. In keeping with established tradition, Denise L'Estrange-Corbet is outraged, as should we all be. To add insult to injury, the design is based on that of the 1948 kit, made in an era when New Zealand had a textiles manufacturing industry. The contract for the team's casual wear was given to Peak, an Italian company.

So, sod off New Zealand.