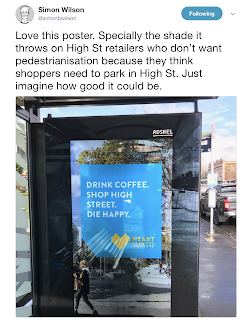 Drink coffee. Shop High Street. Die happy.  Just imagine being dead. You spent your last day on High Street, shopping. You are a shade now; you were thrown off your feet and on to your head, on High Street. You died happily, because you got that thing you really wanted. You were run down by an oaf in an Audi; but you were happy, because bargains like that don't happen often. You were dying to get home and try it on; but now you are dead. Never mind. The coffee was good.

This advertisement probably cost the citizens of Auckland thousands. It is the work of Heart of the City, the organisation that takes substantial amounts of money from Auckland City Council and uses it to tell us to go shopping in our own city. Not long ago it started a campaign on the  Link buses, which showed  a film to captive passengers about a city which could have been Auckland, were Auckland a city where everybody and everything is colourful, vibrant and diverse. It went on for what seemed like hours, and then started again. A passenger who looked out of a window of the bus might see that Auckland is not like the film at all, were it not for the advertisements on the windows of the bus which make seeing out so difficult.