Perhaps it is in the same spirit of liberal constipation that, with the exception of Charlie Brooker, we have been too polite to mention the Canadian study published last month in the journal Psychological Science, which revealed that people with conservative beliefs are likely to be of low intelligence. Paradoxically it was the Daily Mail that brought it to the attention of British readers last week. It feels crude, illiberal to point out that the other side is, on average, more stupid than our own. But this, the study suggests, is not unfounded generalisation but empirical fact. Oh no it's Monbiot, as they chant on the terraces. And he is doing it again: being smug in public; smug and wrong. Read the abstract, George, the one to which you linked:


We proposed and tested mediation models in which lower cognitive ability predicts greater prejudice, an effect mediated through the endorsement of right-wing ideologies (social conservatism, right-wing authoritarianism) and low levels of contact with out-groups.

See what they are saying there? They are saying that stupid people tend to be prejudiced and support right-wing views. They are not saying that right-wing people are stupid. There is an important difference between those two claims. For there may be many others, intelligent people who are right-wing, who were not part of this study: this was a study of stupid people, not of right-wing people. Is this difficult to understand? I only ask because it seems to have escaped Monbiot's attention, which is rather funny, considering. As A. J. P. Taylor observed in his essay on Lord Salisbury:

The Tory party has been called the stupid party (and not unfairly, to be stupid and to be sensible are not far apart. The Progressive party, Radical and Socialist, is clever, but silly). 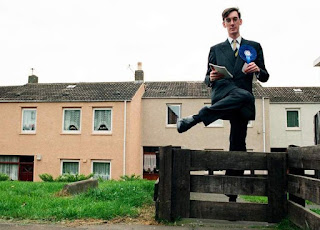 Brian Auger and the Trinity with Julie Driscoll: