Too late to recycle 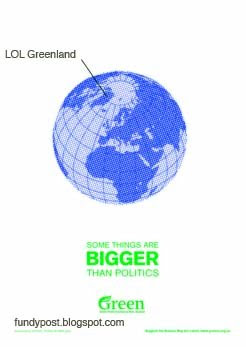 So, it was like this: I was in the audience at a candidates debate, one organised for the Auckland University Debating Society by the estimable Mr Max Harris (who, incidentally, shares his name with an Angry Penguin and the first tune on the first Dead C recording, from their early "cohesive" period). And the man sitting next to me asks me something about my position on sustainable development or something like that. And I reply that it is too late, that we are all doomed anyway. And he replies that my stance is a "let out."

Well, I never. No, really, I never. A let out? I have spent years cultivating my environmental pessimism and I am not letting anyone claim that it is just a means of avoiding meetings on sustainable transport strategies (although it does help). No, seriously, I think we are doomed. It is not just the methane escaping from under the frost formerly known as perma (it was in a more confident age that they named it permafrost). It is not just that James Lovelock thinks we are nearing the end of the golden weather. It is that we are human. Even if we had a really good idea to save the planet, we would stuff it up. And we would do so because we would rather carry on doing things as we have always done them.

I am trying to think of times in human history when people put aside their differences, disregarded their petty concerns and worked for the common good: I could go on but it is all rather depressing. When have we ever made a genuine sacrifice for the benefit of others or humanity as a whole? And what must we do to save the planet from the effects of climate change? Now you see why I am a pessimist.

Really, the only way we are going to get off this train is if the oil runs out. Even with the price going up, we keep on buying the stuff. We still use it to make lots of plastic crud which we don't need. We give ourselves a warm glow when we drop the plastic containers into the recycling bin, but we don't ask ourselves why we bought the plastic in the first place. And then we worry about Peak Oil. But it is the only hope we have.

One more thing. The plastic crud that does not make it to the recycling bins makes it to the sea, where it circulates in huge gyres. The sea of plastic would destroy the fish population, had we not fished it out of existence.

I could go on but it is all rather depressing. When have we ever made a genuine sacrifice for the benefit of others or humanity as a whole?

CFCs and the ozone hole. Fixed by binding international agreements. The one bright star in the darkness that is international diplomacy. So there is at tiny bit of hope left, just.

I too am a pragmatic pessimist when it comes to climate change. IOW I think, as a scientist, that we can moderate and control it. But for the reasons you enumerate I suspect that we wont.

Look on the bright side though, we are using the resources of the world in such a way that a reckoning is rushing towards us at an ever increasing rate. See this week's New Scientist for the lowdown.

I can also tell you don't have offspring Mr Litterick. I do and I shudder to think at the world we are bequeathing our offspring. We at least owe it to the next generation and the one after that not to fuck the place up too much. It is the equivalent of signing a rental agreement then shitting all over the floor and covering that with used sump oil and filling the air with noxious fumes.

Besides the reckoning may just come when you and I are in our dottage and thus at the absolute mercy of an enraged yoofdom.

I don't think we are completely doomed because I am a proud the glass is half full Modernist. Don't forget all that human ingenuity and co-operation HAS achieved like getting rid of small pox and all the miracles of the modern age we take for granted like the internet and antibiotics. I refuse to fall prey to apocalyptic end times thinking- there is always an impending apocalypse threatened and it always seems to be tied to some quasi religious ideal of how "other people" should change their behaviour and be somehow more pure, better people in order to avert the day of Judgement. Environmental doomsaying is just another manifestation of the same old same old.

i don't think we're doomed as a species, but our oil-based civilisation is.

at least there are 6billion of us now, so not *everyone* will die when everything turns to custard.

According to New Scientist, we are going to start running out of everything (everything be ing platinum, zirconium all that sort of stuff) in about 20-40 years as well. But I am an optimistic chap, and whilst I suspect a Malthusian population crash is a distinct possibility, it would take some true awesomeness to wipe all six point something billion of us out. I mean, even if 99% of us died off, there would still be seventy-eighty million humans rattling about the place.

More likely is a population crash exclusively afflicting the third world as those who contributed least to the global ecological disaster pay the biggest price.

And technology will provide the answer for everything else - asteroid mining (three million convicts in the U.S. Corporate prison system need to be employed SOMEWHERE - if you are black dope dealer doing life without hope for parole for being caught three times selling a tinny, wouldn't you leap at transportation to a space minimg colony for fifteen years then release as a sentencing option?), carbon sequestration, algal fuels, and all that stuff.

And finally my little bit of manifest destiny/optimism - I firmly believe there is no such thing as UFO's. I believe in the Fermi Paradox, and the Drake Equation. There are plenty of worlds out there capable of sustaining life, and plenty of worlds that have life. But I suspect that we are the only place where intelligent life currently exists, at least in this galaxy. We'll go out there one day and ensure the human species brings ruination and spoil to ecosystem not yet even dreamed of. Lets just hope all that alien mega fauna isn't to tasty.

I thought of another area of co-opeartion: Polar Bears. During the Cold War, the USA, Canada and the USSR co-operated on projects to monitor Polar Bears and ensure their survival. This happened, despite our enmity with the Ruskies.

Of course, things don't look so rosy for the Polar Bears now.

"the first Dead C recording, from their early "cohesive" period"

Accusing the Dead C of having a "cohesive" period is a bit like accusing Air Supply of having a "grunge" period, surely?

And technology will provide the answer for everything else - asteroid mining

Oh great, instead of learning to live sustainably on the only world we have we use vast resources to go mine others. The resources needed to escape our gravity well are huge. Add in surviving the radiation in interplanetary space and life support. Then there is the energy needed to get into orbit around an asteroid. You are belting towards an asteroid at high velocity (not wishing to literally spend years getting there). Now how are you going to slow down?

It cannot possibly be doable without scifi style innovations which are not in the pipeline.

We will not survive by star gazing. Which is not to say we should not study our neighbourhood. Only that we cannot live off it.

"...Oh great, instead of learning to live sustainably on the only world we have we use vast resources to go mine others..."

"Space is big. You just won't believe how vastly, hugely, mind- bogglingly big it is. I mean, you may think it's a long way down the road to the chemist's, but that's just peanuts to space." - Douglas Adams


For example, asteroid 16 Psyche, an unappealing main belt rubble pile, is pure iron-nickel and could supply earth with all our steel, nickel and some othher relatively rare materials for several million years at current consumption. 16 Pysche to far away for you? Asteroid 1999 AN10 is feted amongst some doom day circles for being on target to hit earth in 2027. Or 2029. Or sometime after that. Whatever, it gets jolly close and seems to hold commercially viable amounts of rare minerals.

Given that everyone wants to have as many kids as they want and give them all flat screen TV's and an SUV, the only answer is to sate our infinite demand by going into space where, for all intents and purposes, supply is also infinite.

Given that everyone wants to have as many kids as they want and give them all flat screen TV's and an SUV, the only answer is to sate our infinite demand by going into space where, for all intents and purposes, supply is also infinite.

I see, you put changing new fangled behaviour back to what it used to be is too hard. So instead you posit some piece of science fiction to do instead.

Please excuse me if I look askance at that. Now, can we get back to living in the real world please? or do you have Buck Rogers tied up in the basement?

I agree with your pessimism regards climate change. I imagine that even stopping CO2 output today would not make a difference - let alone stop the more effective (in warming properties) methane gas being released from the Siberian permafrost. It'll become a question in how to live and survice ina world that is too hot, too dry, too windy, with most fertile flood plains flooded by a risen (fished out) sea level.
Question too how to prevent yourself from committing suicide (or religiously inspired mass murder) due to all that pessimism.

Re: worldwide efforts to eradicate polio, we were on the right track until some imam declared it a genocidal anti-muslim policy and so now it's back affecting their children.