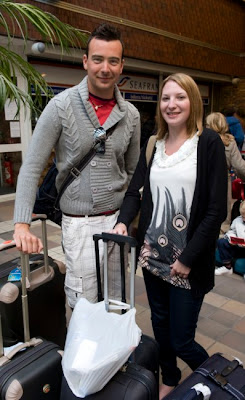 Britain is a strange and distant country ruled by strange and distant people with improbable names like Baroness Scotland and Lord Adonis. As readers of this blog and of more reputable news sources will know, Britain has been enjoying a crisis recently; it is only during crises that the British are truly happy. Sadly, in part due to the machinations of a mysterious man in a white coat and with improbably chestnut hair called Peter Mandelson, this crisis may be coming to a premature end.

It seems that Science has changed during the course of this week. Only a few days ago, vast amounts of volcanic ash had the ability to stop the engines of jet airliners, with catastrophic results. Now, it seems that this is no longer the case. After extensive lobbying, flying through clouds of volcanic ash has become quite safe for commercial aircraft. The application of political techniques to the situation has brought about a result that could not be achieved by scientists, engineers and other white-coated boffins. The many thousands of Britons stranded in European countries with distressingly superior food and standards of dress will now be able to return to the damp and cheerless homes. They will also be able to vote for a Government. All is well.

The Government (which doesn't really exist because they are having an election) had planned to send what the Daily Mail called [irony alert] an armada to Spain. One ship, the patriotically-named HMS Albion, managed to get through; there was of course a fuss, which generated outrage and a very long headline. The other ships of the armada, HMesses Arc Royal and Ocean, did not reach the Continent in time; besides, there was a perfectly good ferry service and a tunnel. More outrage ensued when a German airliner was spotted over Heathrow, generating the Sprit of the Blitz (otherwise known as xenophohia). However, all is now well. The people of Europe proper, who have witnessed knitwear the like of which they have never seen before, will be relieved to know that the British are on their way home.

The Hallmark Poet Laureate has written a poem about it.

In other news, in the days before celebrity makeovers British television was this good:

One man was stranded in the Maldives.

It's fantastic. The West End is like 48 Hours Later but with better dialogue.