This must be the place 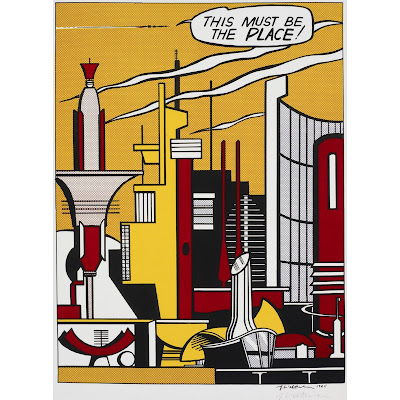 Breaking Party Central News: they are going to tear down the permanent buildings and put up a temporary building; towards a new architecture, as someone once said. The inescapable logic of this decision somehow escapes me.
This is the story so far: we need somewhere, apparently, for the crowd to go wild between Rugby World Cup games; none of Auckland's existing public spaces will do, for reasons that remain unexplained. The Prime Minister decreed that Queen's Wharf will be Party Central. An architectural competition was held in which New Zealand's top architectural firms competed against designs submitted by children. The competition was won by Jasmax - New Zealand's top comedy-architecture firm, which had not entered. The Government's extravagant plan for a building that could not possibly be built in time for the football then fell apart, not because of its impracticality but because the Government could not force Auckland's doomed local bodies to pay for it. So the Government and Auckland Regional Council found itself owning a wharf with two sheds on it. Now read on.
You would have thought that a wharf with two big sheds on it it would be enough, but you would be wrong. The Government has a new plan. They will demolish the sheds and put up a temporary structure. Then they will remove that and replace it with a permanent structure.  So, a lot of money will be spent removing buildings and more money will be spent installing a temporary building; then more money still will be spent removing that building, and yet more money on building a new building, the details of which have yet to be decided.
As the artist's impression shows, this will be a great place to party in Winter and park ghost cruise-ships. Of course, the real cruise ships that will be parked either side of the wharf for the duration of the tournament will not be transparent; they will be quite opaque and they will obscure the temporary building. So the temporary structure will be visible from only two aspects, one of which is the harbour.
So, to recap, a lot of money is being spent on a temporary structure which will be obscured by ships. This does not seem a very good way to spend a lot of  money.
Why can't they hold the party in the sheds? Why are they destroying historic buildings which could be used for party purposes, only to replace them with a temporary building which will be largely unavailable for viewing? And why won't the Historic Places Trust do anything about it?
And why is the temporary building so awful? Because it looks like a wave, or a sail, or a lamington, or whatever you choose to think it looks like; because buildings these days have to look like other things which are not buildings, but are iconic. So the real iconic New Zealand buildings  - white wooden sheds with tin roofs - will be replaced by a temporary building that sort of looks like something which is said to be iconic. That's Post Modernism folks.
Here  is an amateur video in which the guilty men look shifty. Mike Lee, Chairman of the Auckland Regional Council, is the one with the hair; Murray McCully, Cup Minister, is the one without the neck. You can go visit the wharf at 1pm on Sunday.
The next song is not by The Feelers; it is about a cat:
Posted by Paul at 5:46 pm

That pretty much sums it up, Paul - thank you. The corrugated shed is an NZ icon - and also very practical in the blustery, humid climes of Auckland's harbour. Opening up the waterfront has been a disaster *because* it's a waterfront, full of weather which humans need to shelter from. The old cement awning / walkway around the ferry building was perfect in winter - you could peer out at the climate while being protected from it at the same time. The "ugly" sheds would do the same - much better than a post-modern comb over.