At home with the Johnsons 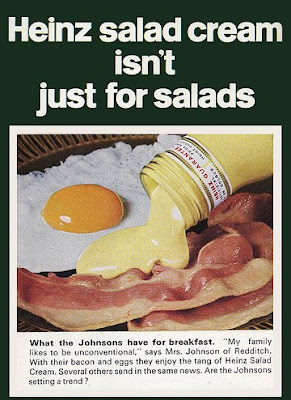 I don't know how you wasted your weekend, but I spent much of mine in Retrospace; there I found many horrors, not the least of which was this advertisement from the Seventies (younger readers will be amused to learn that the Seventies was once called 'the decade that taste forgot,' by The Face magazine in the Eighties – yes, I know).

Fortunately, the Johnsons of Redditch did not set a trend. It turned out that Heinz Salad Cream was just for salads; HP sauce was for breakfast. What's more, not long after this photograph was taken, the English discovered mayonnaise. Then they discovered that there is more to a salad than a bowl of lettuce topped with quarters of tomato. Not much later, they bought those Philippe Starck juicers which long like googie spaceships and which do not work. At about the same time, they bought the River Café Cook Book and started cooking with a blow torch. Later still, they discovered crostini, but did not realise that it is the Italian for toast. Futurologists predict that it will not be long before the British learn to make a decent cup of coffee. Of course, futurologists are usually proven wrong.

The popularity of salad cream has waxed and waned. At some periods in history, it was viewed primarily as a condiment for the lower classes, and an alternative to mayonnaise, which tended to be more expensive. Middle and upper class families at one time avoided salad cream because they did not want to be perceived as members of a lower class, but this is no longer the case today, although salad cream sometimes pops up in parodies of lower class life in the British media.

More culinary horrors can be found at Misguided Efforts in Cookery. It might not be coincidental that Johnsons of Redditch are the town's Volvo dealership: younger readers will be bemused to learn that the Volvo was the staff car of the English middle class in the Seventies.

Re: Coffee. You may or may not know that all of the major chains of the UK serve the flat white, and without exception they are awful, and an embarrassment to the name.