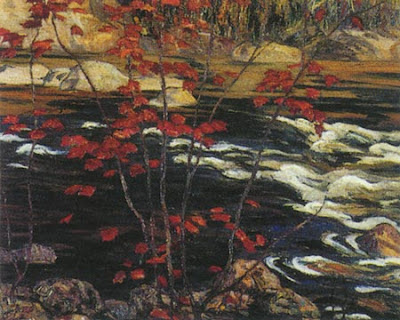 In the interests of fairness and accuracy, the Fundy Post wants you to know that the seven men without ties who appeared to be representing the Exclusive Brethren at the last General Election were acting on their own behalf. They were merely a group of concerned businessmen, family men, taxpayers. I am sure none of you will have any difficulty believing this fact, unlike that curmudgeonly David Farrar.

In the interests of Art, I must plead with Mr Farrar not to call this bunch the Group of Seven. Apart from being the name given to some meeting of world leaders, the Group of Seven was a circle of Canadian artists, rather good ones at that; Please, David, these things matter to me.

Pictured above is A Y Jackson's The Red Maple, which is much prettier than the Exclusive Brethren
Posted by Paul at 8:04 pm

The image of the eponymous Group at the link provided reminds me of some of the later photographs of the Abstract Expressionists in New York. I feel some regret at having missed out on the era of tough-talking, chain-smoking, hard-painting Groups.

Having said that, some friends and I did for a while refer to ourselves as the Action Pianists. This arose after an international student of mine suffered a complete failure of memory in an exam and referred to Jackson Pollock as an Action Pianist rather than the usual appellation. The Action Pianists never produced any art, but we did shout our group title before drinking the first pint of the evening on a number of occasions.

As for the EBs who acted alone, perhaps they would be better titled Seven and the Ragged Tiger?

The other night on Alt TV, real late, I stumbled on what I think was a Bored Games video - like, WTF?

Has anybody else seen it & does anyone know if there is a version available on the interweb?

Strange but true: Bridesmaid is on the Very Short Films DVD, which is full of unusual gems, including Stephen Malkmus covering Death and the Maiden.

Alt TV is wonderful for this sort of thing.

Another Bored Games video, "Happy Endings", is available on the "Second Season" DVD.

They've got that Stephen Malkmus vid on (fairly) high rotate. Other gems I've spotted have been Needles & Plastic and Immigration Song.