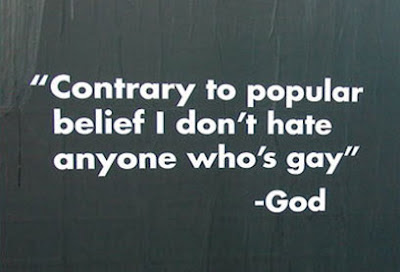 This news came as a surprise to me, considering the number of God's advocates who seem to be quite obsessed with gays and what they get up to.

The news offended one A Miller, who complained to the Advertising Standards Authority on the grounds that the advertisement "was likely to cause serious and widespread offence in the light of generally prevailing community standards." The ASA disagreed

What I want to know is whether it is gays or God to whom A Miller objects. Which community standards does A Miller have in mind?
Posted by Paul at 7:06 pm

I presume A Miller was one of those "God Hates Fags" placard wavers.

Perhaps he was one of those folks who recently graffitied an NZAF poster in green felt, and misspelt 'faggot' faget?