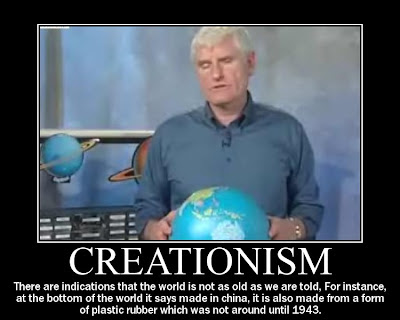 From the Globe and Mail comes this opinion about the funding of "faith-based" schools. The author, a graduate student at Columbia University's School of Journalism, has a compelling argument: I went to an Islamic school; it was crap; therefore Islamic schools should have public money. One might argue that the authorities should have closed down the school, which was clearly inadequate. The school didn't have hockey nets, so how could the students learn Canadian values? But the author doubtless would say such an argument would be "fanning the flames of hatred, division and religious intolerance," in a way which no faith-based school ever would.

The funding of religious schools is the hot issue in the Ontario provincial elections. Tory leader John Tory (yes, really) has promised $400 million to extend funding from the Catholic schools (who always seem to get the money) to those of other religions. The Liberals are arguing that the public system will suffer. Meanwhile the Quebeckers will have none of this tolerance nonsense.

Back in the Old Country, HM Government continues its policy of handing over the education system to the faithful. Here in New Zealand, merely discussing
the subject of religion in schools provokes "dissention, marginalising and possibly forced solutions," if Challenge Christian Weekly is to be believed.
Posted by Paul at 10:38 pm

The reality of Canadian history is that accommodating faith-based ducation is the norm, rather than the exception. B.C., Alberta, Manitoba, and Quebec, like Ontario, have provided significant funding to faith-based schools for decades, and have dynamic, unified societies. We need to build on the lessons of Ontario history, and expand the public system to include other faith-based groups, just as was done very successfully with Roman Catholics.

If people want their kids indoctrinated with religious mythology and authoritarian values, then let them pay for it themselves and do it in their own time, after school or in the weekend, just as people of the Jewish faith do. The insidious erosion of the public education system by religious zealots must be stopped.

I keep wondering what would happen if faithbased also meant Unitarian, Wiccan or other liberal religious educational facilities...

And incidentally, doesn't the term 'faith-based' discriminate against those who hold rigorous secular philosophies in this context?

Speaking of which Paul - did you see this in Questions in Parliament. Rather nice, referencing Exclusive Brethren and Maxim Institute in the same reply:

"Hon Bill English: Will the Minister now answer a question I gave him notice of this morning, which is: what actual examples of political advertising occurring outside the current 3-month election period did Cabinet consider were unacceptable when it decided to lengthen this period for up to 11 months?

Hon MARK BURTON: One example is the $350,000 Wake Up New Zealand campaign, run by the Exclusive Brethren before they ran their $1 million campaign in collusion with the National Party, and they made very clear, in running this campaign before the 3-month regulated period, that its sole purpose was “getting party votes for National”. Another example that I think Mr English is personally well familiar with is the case of the Maxim Institute. The Maxim Institute, while purporting to be non-partisan, expended a large part of its $1 million budget coordinating a series of education releases specifically designed to support the National Party education policy programme. Again, that series of releases commenced before the beginning of the 3-month regulated period."