A million different people from one day to the next 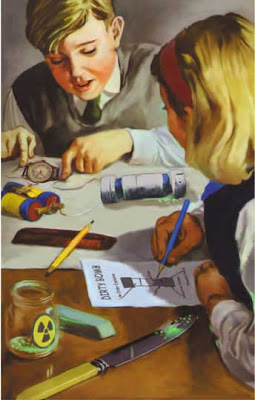 Leaving aside the all-too obvious fact that China has loads of nukes and an aggressive foreign policy (and an excess of young males due to its one-child policy; but that is another matter, although a worrying one - India has the same problem and nukes as well, but that is by-the-by), the obvious farce of this event is the supposed connexion between North Korea having nukes and its supposed support of Terrorism.

Of course, we all remember the Axis of Evil, the imagined alliance between North Korea, Iraq (old Iraq) and that other country, which we can't quite remember. This Axis was the cause of Terrorism, so we were told. We were also told about the Nukes, which these countries (sorry, regimes) possessed, or were about to possess, or might possess. These they might pass to the Terrorists, who are the sort of people portrayed by David Suchet or Dr Ropata in movies about hijackings of airliners (it is interesting, although not necessarily important, to note that Terrorists in movies are never portrayed by American actors; in fact, it is quite important; but that is another matter).

So, how about that North Korea, Nukes, Terrorism connexion? How does it work out? Well, not at all, if you want my opinion. For a start, is there any evidence that North Korea has any link with any Terrorist organisation? Correct me if I am wrong, but I think not. North Korea is an absurd nation which would be really, really funny if its population were not starving. It is so bat-droppings stupid that it would not make an Axis with anyone, let alone a bunch of Saudi weirdoes who have never had a woman and really, really want to go to Heaven so they can get their quota of virgins for Eternity.

And, if the North Koreans wanted to share their Nukes with the Terrorists, what would the Terrorists do with the Nukes? If you are thinking to yourself, "they will blow up entire cities, in pursuit of their nefarious ends," now is the time that you need to know something about Nukes.

Now, at this point you may be thinking "but you, by your own admission, are but an humble Art Historian, so what do you know about Nukes?" But you forget, I used to work for the Ministry of Defence, in Whitehall, London SW1A 1AA. I am an Art Historian who knows about Nukes, a curiously dangerous combination.

For a start (a second start), it would be very silly of the North Koreans to give Nukes to the Terrorists. They, the Terrorists, might do anything with them; that's what Terrorists are like. Power, responsibility – they don't meet. People who are prepared to fly themselves in planes into tall buildings could not be trusted with Tupperware, let alone bombs. The North Koreans, despite their fondness for parades and cabbage, are not stupid. Give odd people stuff and they will use it in odd ways.

Second, Nukes are really, really high maintenance. You give them to people; those people have to look after them. They are like children, although not so dangerous. They demand constant attention. They emit rays, which boil your liver. They decay, constantly. They need to be turned - yes, this is true: there are people at nuclear bases whose job is to turn nuclear weapons; it is quaint, in a way, like making bread or maintaining a compost heap – but nuclear weapons have to be turned regularly, otherwise the atoms will do bad things.

Third (and following on from the turning thing) everything about Nukes is weird. They don't behave like normal things. Nukes are made from stuff you can find in the ground - Uranium. But take that stuff (which, quaintly again, comes in what are called "cakes") and mess about with it, and it does really, really strange things. Nuclear Physics is very difficult for very good reasons: nuclear things do very odd things (sub-atomic things is even more strange, but that is another matter). Hang around with nuclear stuff for too long and you will glow in the dark; worse than that, you will look like Michael Stipe; you will also feel worse, because your liver will be boiling. In order to work with nuclear stuff, you need to have several inches of lead between you and it, which might be difficult if you are in a motel room in Reno (call me when you try to wake her up, as it were).

Fourth, and this is really, really important, Nukes are difficult. In order to make the most simple Nuke work and kill thousands of people, you have have to make two bits of nuclear stuff come together very, very quickly and in precisely the right place. This is not easy. It involves lots and lots of little explosions, precisely synchronised.

But, you say, "aha! You are but an humble Art Historian and you have not considered Dirty Bombs; Triple Word Score." To which I reply: yes, Dirty Bombs; that is where you get all the nuclear stuff and you avoid all the problems of synchronising lots and lots of small explosions and having a PhD in Nuclear Physics and instead you just spread the nuclear stuff over a wide area and give lots of people cancer. Yes, well and good, but how do you spread the nuclear stuff? Consider a bag of flour (yes, sexy, isn't it?) and think about how you would spread it over a wide area, so lots of people got themselves infected by a small amount of flour. Not easy, is it? Things don't spread that easy. And nuclear stuff comes in much smaller amounts - really, really small cakes - than flour. So how do you spread it, without boiling your liver? Answers on one side of the paper, please.

So, there you have it. If you are a Terrorist with nuclear ambitions, you have to find a state which is prepared to trust you with Nukes, then you have to find a way of making nuclear weapons or spreading around a small amount of nuclear stuff so that it kills lots of people. None of this is easy. If, on the other hand, you are a state that possesses Nukes (and, if you are, I hope you are reading) you have to consider what gains you can obtain by giving Nukes to the Terrorists.

Of course, the truth is that Nukes are held by a small number of nations that have the capability to produce and maintain them - that is, people with PhDs in Nuclear Physics and lots and lots of lead. It used to be that those nations were the USA and Britain. Then the Russians got them and the French (yes, I know) and then the Chinese. Not coincidentally, these nations are the Permanent Members of the United Nations Security Council, but that is another story. Then some of these nations let other nations have their technology, so now some really bat-droppings stupid nations like Pakistan have Nukes. And then we worry about Climate Change.

Enough of this gravity. The magnificent Sean Hughes once said, "I bumped into that Richard Ashcroft on the street:"

Nice. Worth noting too that it wouldn't be difficult to trace the origin of a North Korean 'dirty bomb' back to North Korea. Cue bombing into Stone Age, shock and awe, full force, etc. Kim Jong Il did not get where he is through merit, but he hasn't stayed there through being stupid either.

What I don't understand is why destroying a power station's cooling tower counts as nuclear disarmament.
I mean, there is a geothermal plant in NZ with a cooling tower.

It's not rocket science.

'Pull yourself together man, this is nuclear physics, not rocket science!'

- possible simpsons quote, not sure.

As a resident Nork watcher the reason that the Norks have nuclear weapons is a simple one, money.

If they say they have some they can extort aid.

As a resident Nork watcher ...

Oh, sorry: I thought you were talking about something else altogether there ...

As you were then.

But surely they've still got the nuclear materials to make bombs?

The problem for policy makers doesn't really come from the destruction caused by a dirty bomb attack. That would be limited to the size of the conventional explosive used. Radiological exposure could be treated with iodine tablets and wash downs. The problem comes from cleaning up the bomb site to acceptable levels. Current US regulations require a site to be cleaned to the point that an inhabitant would only have a 1% higher risk of cancer over an entire life time. This standard would be impossible to achieve after a dirty bomb attack. However, it is uncertain that a terrorist group would wish to impose this kind of damage, they'd probably prefer something with more immediate consequences.