Bugger dumb the last of academe 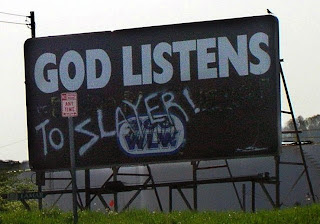 Elsewhere, Steve Price comments on a rather alarming decision by the Chief Censor to ban a Cradle of Filth T-Shirt, at the behest of our old friends, the Society for the Promotion of Community Standards. I am now seeking an Opinion on whether the Chief Censor can ban blogs.

Trenchant commentary on this matter also comes from Idiot/Savant, in the context of blasmphemous libel remaining in our Crimes Act, while the equivalent offence has finally been abolished in Britain. As you will see, my former employers have written a media release, a typically passive-agressive action from the organisation which claims to speak for New Zealand's "non-religious community."

Warning: the following promo, by Clutch, may be considered blamphemously libellous by fundamentalists or alien robots from another galaxy:

Hey, I have one of those t-shirts! And the censor can go fuck himself as far as I'm concerned!

Paul said...
This comment has been removed by the author.
6:52 pm

Perhaps we could make a shirt showing the Chief Censor fucking himself and see what reaction it gets.

I've been watching NZ fundy blogs for a while and the change of tone with which this decision has been greeted is hilarious. SPCS site itself is full of fawning praise for the Office of Film and Media Classification which is a strong contrast from their usual treatment of Bill Hastings as All High Gaylord of Pr0n.