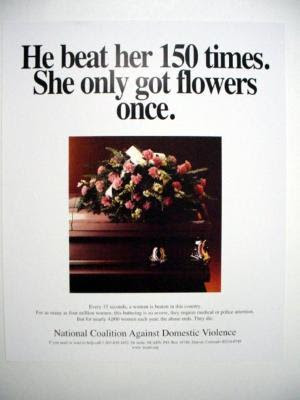 I am grateful to Rob for posting the thoughts of Owen McShane on the Veitch affair. McShane is well known in the world of climate change-denial as an expert, despite having neither qualifications nor experience in any relevant discipline. Still he is not alone in this respect.

This is what he has to say about domestic violence, another issue about which he knows nothing:

We are always asking people to take personal responsibility for their actions.
These two people, as free adult individuals, have done that.
We know that in these circumstances there always exists, or can be claimed to exist, some sharing of blame.
Like of all of us, I have either participated in, or have observed, family rows, and it is difficult to say who started what and who was initially and finally to blame.
Both these parties decided to accept responsibility and negotiated a settlement. She has been saved the distress of public exposure (UNTIL NOW) and also did not have to sue through the courts and drag lawyers and police into their personal lives.
He avoided the same distress and paid compensation of $100,000 and took on more counselling etc than the courts would have imposed.
It seems that many do NOT want people to take personal responsibility because it deprives them of their prurient pleasures while depriving hack journalists of their yellow journalism and their opportunity to be so much holier than thou.
This saved us all a lot of money.
We have all been saying the police are under-resourced and too busy to deal with real crime - the kind where people end up dead.
And yet those people are now demanding that the police investigate this case which these two parties have settled.
That will take massive police resources off the streets.
And who will be the beneficiaries?
Certainly not the the woman involved who has settled the matter.
So who gains?
Just the trash journalists operating our CHarter and a few man haters who believe that men are responsible for all evil and that all women are saints and can do no wrong."

So there you have it. In short, the little strumpet ought to be grateful. After all, "We know that in these circumstances there always exists, or can be claimed to exist, some sharing of blame" (protip: look at this sentence closely and you see that it is utterly meaningless). Having observed "family rows," McShane knows that it is difficult to say who to blame. So, although he knows nothing of the circumstances of the violent assault committed by Veitch, he can see that the ungrateful little trollop was to blame. Despite this, Veitch took responsibility, not only taking counselling but also paying that slut for the inconvenience she experienced. He also saved her the distress of public exposure (obviously, the tart had something to hide) and the nuisance of courts and police. Consequently we have been, all of us, saved a lot of money because Mr Veitch and that cow took responsibility and negotiated a settlement. Because that is what it all about: a contract, a deal, a negotiation.

I give up. I was going to say more but I can't be arsed. I think we can all spot a misogynist, one who is more concerned about money and contracts than human suffering. Enough. He was always ghastly; now he is worse.

Wait, there's more. As noted in comments below (or to the right, depending on which way you are looking, lovely Lita promises to write to the Sensible Sentencing Trust, re the sensible sentencing of celebrity thugs.

Here is something that might indicate the timbre of the Trust's response. The sole mention of domestic violence on its website is a page considering its costs.

If only all those tired and stressed men were like Mr Veitch and would take economic responsibility for their actions.
Posted by Paul at 10:37 pm

Hmmn, SST advised me to take a private prosecution out against Veitchy. Tis all too difficult. They can't afford to do it, so they want me to. Um, yeah, but I'm not going to. Even though I loved LA Law.

Amazing Mr McShane prefers the cops to investigate "real crime - the kind where people end up dead." So breaking someone's back isn't a crime then. Glad we know now.

I love how Badedas bath came up randomly. He sounds like a total prick though, yes.