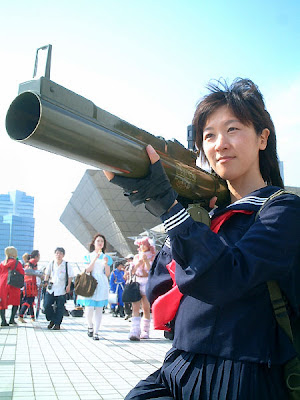 Is it just me, or is Peter Low of the Asian Anti-Crime Group absolutely barking? You see, he has a plan: he is training as many as 300 people in martial arts. And if that doesn't work, he is going to call in the Triads.

Let's get this right: Mr Low's solution to the crime problem is to hire gangsters. Apart from the somewhat skewed moral stance displayed by Mr Low, isn't this the sort of thing that happens in martial arts movies?

Not surprisingly, the Sensible Sentencing Trust are involved with his campaign. They and Mr Low are determined to make what they will of the coincidence of three murders happening in a short period. They want people to be afraid, regardless of realities. And of course, its all the fault of the Government: "Kids don't respect their parents any more because of law changes." Wut?

As an added bonus, Pansy Wong has let slip one of the dogs of war: a policy. Apparently, "National believes more has to be done on crime prevention, rather than having dozens of police officers working on homicides." So, how will that work? Will the Police no longer be investigating murders? "I am sorry for your loss madam, but all our officers are busy on anti-tagging patrols."

Mr Low is from Singapore. No further comment required...

Wait - to be fair, wasn't Annette King saying "it takes more community involvement in crime prevention rather than just frontline cops" over the last few days as well?

Mr Low was, however, calling this sane proposition a cop-out over the weekend, saying that the taxpayer has an inherent right to be completely safe. So he's after a police state, with gang-supported vigilantism an acceptable second choice? Boggles the mind.

You chaps should have heard Mr Low's verbal assault on Sean Plunket on Morning Report. Catch it on the podcast - it was a short time after Seven.

Further to Paul's comment, I think Low destroyed any credibility he may once have had this morning. Choice excerpt: after appearing to have said that he was already employing Triad gangs for security, his justification? "I have money. I can do what I want".

"Kids don't respect their parents any more because of law changes."

People say it's ineffective, but I am adamant that it has caused a 5.3% reduction in littering in my community.

Yes, mad but slightly disheartening that so many of the your views commentators seem to be agreeing with him.

Yes, Your Views is somewhat alarming (hats off to Russell)

I gather the kids pass the third reading of that badboy around as MP3s. Word.