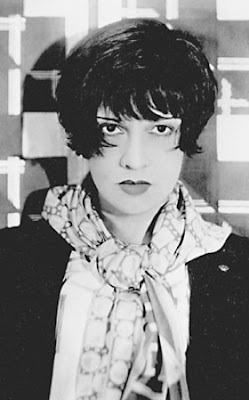 Indeed; I desire to destroy the architectural writings of Adolf Loos, because they are all like this. On and on he goes, ranting about his petty concerns, especially the problem of Ornament: "I have therefore evolved the following maxim, and pronounce it to the world: the evolution of culture marches with the elimination of ornament from useful objects." Pompous ass.

Gentlemen prefer gamines. So, this week's crush is Anita Loos [no relation], author of Gentlemen Prefer Blondes and numerous screenplays, the woman who once said:

I'm furious about the women's liberationists. They keep getting up on soapboxes and proclaiming that women are brighter than men. That's true, but it should be kept very quiet or it ruins the whole racket.