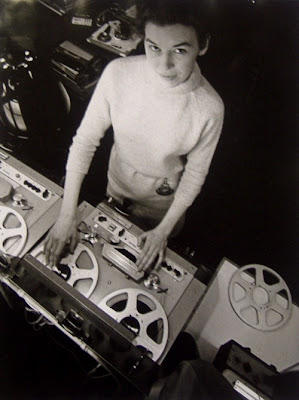 A fan writes: "In 1959, on approaching Decca records, Delia was told that the company DID NOT employ women in their recording studios, so she went to work for the UN in Geneva before returning to London to work for music publishers Boosey and Hawkes.

In 1960 Delia joined the BBC as a trainee studio manager. She excelled in this field, but when it became apparent that the fledgling Radiophonic Workshop was under the same operational umbrella, she asked for an attachment there - an unheard of request, but one which was, nonetheless,granted. Delia remained 'temporarily attached' for years, regularly deputising for the Head, and influencing many of her trainee colleagues."

Living, as we do, in the Age of Dumb, where stupidity, ignorance and nastiness are among the valued traits of the throngs of celebrities and nonentities who appear on our television screens, it is easy to forget that nice, smart people were once valued for the useful things they did. One such person was Delia Derbyshire, who made beautiful music on beautiful electronic gadgets, for the BBC. Here is Brian Hodgson's obituary . It is also worth noting that smart women are really quite hot, especially smart women with synthesisers. 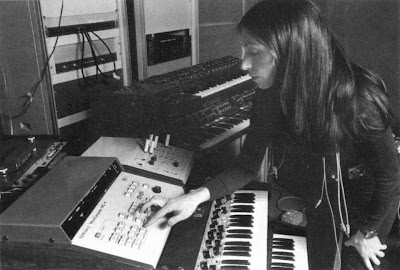 For the full hip experience read about Derbyshire in French, with photographs of early British synthesisers. Added bonus: play spot the Pink Floyd.

With kudos to Deborah whose excellent Friday Feminist/Womanist/Activist series inspires us all to talk about women on a Friday.
Posted by Paul at 12:01 pm

Thank you for the linky love, Paul. I'm feeling a little chagrined, because I missed posting a Friday Feminist/Womanist/Activist last week, and I didn't even realise that I'd done it, or to be precise, not done it, until about half way through the week. Oh well...

Agree re smart women, esp. with synthesisers. Derbyshire was really something. 'Tis pity she was an alcoholic - her life story is a sad one. But some marvellous music along the way. Link-whore alert: I mentioned her here, http://quoteunquotenz.blogspot.com/2010/06/album-title-of-month.html, as it so was nice to see her work being used still.