The Fundy Post's Christmas Message to the Commonwealth

1. Really, that is all there is to it. It is a simple message of peace, suitable for the season.

2. Oh well, if you must, here is an example: that St Matthew-in-the-City business. Here speaketh Ven Glynn Cardy:

Archdeacon Cardy said the billboard was designed to let people outside the church realise that many Christians and church leaders did not believe in the literal virgin birth, and didn't believe that was the true meaning of Christmas. "We're not out just to deliberately stir the pot. We're out to critique the idea of a male god impregnating Mary and the literalism of the virgin birth. The topic is ... something the church has talked about for centuries, but what is new is that we have the audacity to laugh at something quite so ridiculous as a male god sending sperm down to impregnate Mary."

You see, he is critiquing again, like he did last summer. I beg to differ. I don't think that is what Ven Cardy is doing at all. I think he is being a dick; in a very real sense. 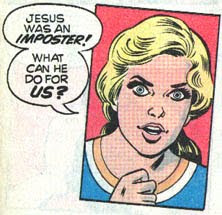 3. It is not my job or inclination to defend the religious beliefs of fundamentalists, Biblical literalists, Bible-believing Christians, call them what you will. But the fact is they hold those beliefs and they hold them sincerely; and the Virgin Birth (which is not the same as the Immaculate Conception, incidentally) is pretty big among those beliefs. And this is Christmas, the season of goodwill to all men and even women. St Matthew-by-the-Carpark might have made a sincere and inoffensive message for their Nativity billboard; but no. For verily they hired Saatchi and Saatchi to make a joke.

4. You see, St Matthew-by-the-Carpark is a progressive church, which means it is a middle-class church, which means it has a God-given right to be, in a very real sense, a dick; because dickishness is next to godliness. So it goes a-critiquing. It decides the Virgin Birth that the ignorant, stupid, literal-minded Christians believe is a thing to be laughed at. After all, those little people do not have Theology degrees. They do not understand that modern, even post-modern, Christians do not believe that literal stuff; clever Christians, middle-class Christians, long ago discarded such old-fashioned beliefs; so those beliefs must be mocked.

5. And so it came to pass that the church erected its billboard, which depicted the rather smutty thought of some adman. And certain shepherds saw that it was (a) not clever and (b) not funny.

6. So the billboard was set upon by violent hands, those hands belonging to people who doubtless strongly disapprove of vandalism when it is committed by teenagers. And the church felt persecuted; yet the Bishop saw that it was dickish. 8. It is also to be borne in mind that progressive Christians, while not believing that literal stuff, reserve the right to use any of its manifestations as and when they see fit. For example, although J S Bach might have had old-fashioned beliefs, he wrote a couple of neat Passions; the performance of either (John or Matthew) is like a flame to middle-class moths. People who have not seen the inside of a church for years flock to a good Passion. Progressive Christians like all that Christmas stuff: the holly and the ivy etc. They don't believe the Gospels - at least not in a literal sense - but they don't mind the trappings.

9. So - you might be asking -what do they believe? Here is Ven Cardy again, talking to an imaginary girl:

As I think you know by now I don’t believe in a god who is a super being, who makes things and breaks things, and who determines how and what things happen. In times past many people did believe in such a god. They prayed to such a god for fine days and wet days, and they believed that this god considered their prayers and answered either yes or no or cloudy.

Today there are some people who still believe in such a god. ‘Evolution is a theory that is wrong’ they say. ‘God made the world in 7 days’ or something like that.

Then there are people who don’t believe that god has anything to do with making the world. Solely by evolution and chance the world has come to be.

Then there are other people, probably most Christians actually, who believe in both evolution and god making things – working together you might say.

What I believe is a little different from all those. Part of what I call god is a creative energy, a spiritual energy, which is within and around living creatures on our planet. That creative energy is a part of the ‘making’ of the world.

That spiritual creative energy, best called ‘Love’, is what makes life worthwhile and satisfying and rewarding.

10. You will see that Revd Glynn (who in fact is Venerable not Reverend, being an Archdeacon) does not believe in a god who is like God. So far as he is concerned, people who do believe in that God are the sort who believe the world was created in seven days - the sort of men who wear beards but not moustaches and who name their sons Seth or Clym and who do not know girls called Isabelle. They are easily dismissed. Ven Glynn prefers to belive in creative energy, which seems be something like static electricity or Ether; or, for that matter, baking powder.

12. Griddle scones are made without baking powder. 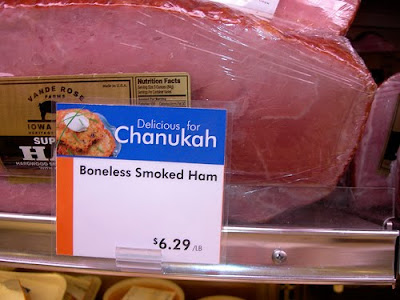 Sounds to me that the Ven Cardy is a Buddhist, but has possibly not figured that out yet...

Rainman the Anglican church is a very big tent, able to accommodate Buddhists, atheists who are bishops, bigot homophobes and gay bishops too (though the homophobes are busy trying to partition off 'their' part of the church).

It is a side effect of having been an established church for so long that as society changed it had to accommodate the changes or be an irrelevance. It will even bless the marriages of divorced philandering princes, though considering its origins that is perhaps no so surprising.

I find the whole thing rather sad. One of the public statements from St Matthew's was that they wanted people to focus on Jesus' love and inclusiveness and fight for social justice...not on irrelevances. And so they make a billboard about the irrelevances. Go figure.

While I don't wish to defend the billboard, I think you're being at least a little unfair on some progressive christians. Non-literal believers are pepper-potted through the mainstream churches; and don't always congregate together in 'progressive' churches. Within the non-literal tradition there is also a tremendous range of different theologies, and while it's easy to sneer at their intellectualism, there is also something refreshing about persons willing to integrate faith and reason.

Sounds more like an identity crisis than a religious philosophy.

As a one-time parishioner of SMITC (and an admirer of Glynn Cardy in his better moments), I don't for a moment defend the sneering, cruel, and tasteless billboard. It was, at the very least, a massive error of judgment. Some of us liberal/progressive Anglicans, after all, do believe in the perpetual virginity of Our Lady, and even give a polite nod to the doctrine of the Immaculate Conception. Part of the reason this whole affair saddens me is because St Matthew's used to have a strong Anglo-Catholic flavour, and Cardy himself has been an important figure in building bridges between Catholic Anglicans and Roman Catholics (neither of whom would be amused by this little joke).

But to castigate progressive and liberal Anglicans as a whole (or those with theology degrees, or whoever else you happen to be angry at) for being dicks on the basis of this sad affair seems a bit, well, dickish to me.

I'm sure Jesus would have something to say about that, but I wouldn't for a moment presume to think I knew what.

"I'm sure Jesus would have something to say about that, but I wouldn't for a moment presume to think I knew what."

I imagine he would have said something like 'Meh, must be another quiet news day in New Zealand.'