Let's get outraged again (like we did last summer) 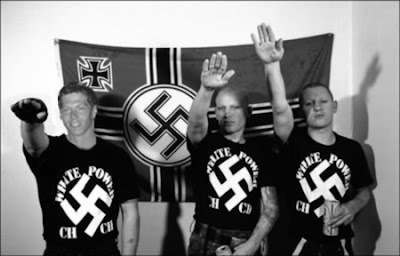 Say what you like about the Nazis, but they at least had really great uniforms and motorcycle-sidecar combinations. Germany before the War was one nation under a homoerotic fantasy. And they were not all barbarians, you know.

But that is not good enough for the grumpy old RSA, which once again is offended. It is that time of year, when there is little real news and thus ample opportunity to make something out of nothing. In this case, the RSA disregards the three strikes-and-you're a bore rule of media releasing, and takes offence for a third time about people who clearly are not Nazis doing something silly. And this event is the least silly of the three: a military re-enactment society having a dinner. Admittedly, the portrait of the Führer was a yucky touch, and the idea of marking the Armistice by playing soldiers is a bit odd, but people who dress up in SS uniforms are hardly a threat to our democracy.

Of course, the RSA's day in the sun is drawing to a close, so they must make hay while the sun shines because at the end of the day old soldiers never die, if you get the mix of my metaphors. In short, their numbers are dwindling. The members of the wartime generation are not being replaced, because fewer people had military experience once conscription ended. This, of course, is a Good Thing. War is a Bad Thing, and the fewer people who are involved in it, the better. But the RSA sees itself becoming irrelevant and, eventually, extinct. So it has promoted the nostalgic militarism which has infected this country in the last decade or more: all those dawn services, the belated acquisition of an Unknown Soldier ninety years after his death, the absurd apology to our Vietnam veterans, the association of national identity with military adventure (of course, the last Labour-led government, to its shame, had a leading role in all this; lest we forget).

Having done everything in its power to keep us reminded of the Second World War, the RSA can hardly object that some people choose to remember it in other ways. Old soldiers like to go on parade, while young nerds like to dress up as Nazis. Perhaps it might be a bit different if we were to cease the flannel about sacrifice and the ANZAC spirit; instead we might remember that the majority of those who died were civilians, that they were killed by both the Axis and the Allies and that they have no memorial.

In other news, Dirk wears white socks
Posted by Paul at 5:25 pm

fewer people had military experience once conscription ended. This, of course, is a Good Thing. War is a Bad Thing, and the fewer people who are involved in it, the better