"Every opportunity the Maoris get they have to do this war dance, whether it is for a funeral or something happy or a wedding. They feel they have to take all their clothes off, stick tongues out and wave spears. That's not New Zealand."

So who is Louis Crimp, the ACT party benefactor who has set tongues wagging and spears waving in the wake of his comments to the New Zealand Herald? Mr Crimp is a businessman. Here are some of the people with whom he has had professional relations: 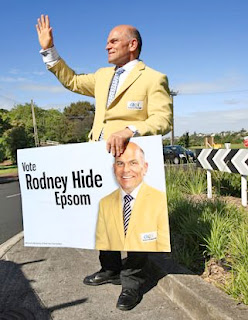 GM Designs owner Graeme McMillan said he had carried out work for Mr Crimp for 25 years. He said he was difficult to communicate with and was not available for serious decision-making. "He can give away millions but not pay the cents that count," Mr McMillan said, adding that he believed Mr Crimp would, like the Invercargill City Council, wait on the sidelines until the government forced action to be taken.


Invercargill businessman Louis Crimp, who owns the building and reclaimed it this week, said he thought any "vengeance" would be against him personally rather than against the house.


Crimp had been heard in a cubicle with a woman making noises which disturbed other guests. … Crimp had explained he had been helping a young woman who was having an asthma attack.


Mr Crimp is in no position to rail, with any integrity, against the foundation's use of pokie proceeds. He has, himself, been one of the grandfathers of the pokies industry in Invercargill, albeit in rivalry with the trust. So his contempt can hardly stem from holding the machines themselves to be an intolerable social harm. Far from overbrimming with sympathy for the problems of pokie addiction, he wrote to our public opinion column in April referring witheringly to "the suckers who addict themselves to poker machines". Much as he criticises the foundation for "making donations to doubtful charities" it has never been pinged for doing so. In fact, the ILT skites, and not without evidence, that it is regarded by governmental watchdogs as a role model for returning proceeds to the community. By shabby contrast it is Mr Crimp who has been caught up in notorious and inglorious misuses of pokie funds. This was in the 1990s, and involved decisions so imperious that they offended rules that were less strict than they are now. The Southland Pool Players' Club, upon whose executive Mr Crimp had been a member, dispensed the money from pokies at one of Mr Crimp's most high-profile establishments, Players' pool hall, for a team of nine members, including Mr Crimp, to attend a pool competition in Australia. This was just part of what Internal Affairs inspectors described as "gross misapplication of proceeds". Undaunted, as he so often is, by official disapproval, Mr Crimp had then stuck his hand out for Players' pokie profits to help pay the 1998 election expenses of Southland Action, a group of candidates which he led into the Invercargill City Council election race.

Crimp had been heard in a cubicle with a woman making noises which disturbed other guests. … Crimp had explained he had been helping a young woman who was having an asthma attack.

I take it this Crimp does actually exist and isn't a Barry Humphries character intended to take the piss out of NZ?

Indeed. As the saying goes, if Mr Crimp didn't exist, we would be forced to invent him. I think I like him even more than Colin Craig.

You chaps are on to something. He is an elderly businessman from Invercargill who gets involved in scrapes with all sorts of people, finances a peculiar party and who talks unwisely, to say the least. He is a sitcom in the making.

Are you telling us that the young woman was having an asthma attack?

I would just like to note that the female members of my family, and my wife's gay cousin and his partner greatly enjoy the tradition of the taking off clothes and poking out of tongues. At least when the well muscled young men of the Sevens side do so in celebration of winning a tournament and/or the World Series right in front of us.

Having learnt a haka (NOT ka mate) and performed it in public despite being unrelentingly white I note that it has passed into wider NZ culture. I consider this to be a good thing, especially when overseas as it is distinctive and recognisable.

It can also be useful. When the Welsh banned the All Blacks from doing one on the field they did it in the dressing room and beat their hosts by a record margin.