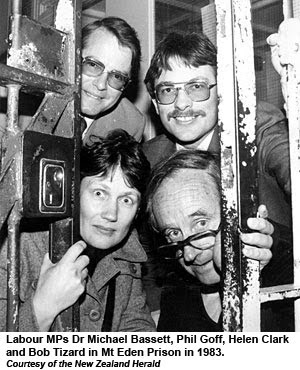 [Jeff] Hayward is fascinated to see the virtual holus bolus transfer of the Princes St branch of the Labour Party and the University Labour Club to Parliament and, moreover, to Cabinet. “They wield a great deal of power now, and their ideas are really starting to gel. Even though they used to sing The Red Flag once a year, they’re worlds apart from the old Labour Party. They’re well educated, young, radical, but not left-wing radical. They’re proving better capitalists than National ever was.

“Helen Clark went through the same branch, but she’s the old ideological voice of the party.

“Phil [Goff] is one of the inner group, of Roger Douglas, Richard Prebble and Mike Moore. Even though he’s only 32, he’s highly regarded. They’re always popping in to consult him.