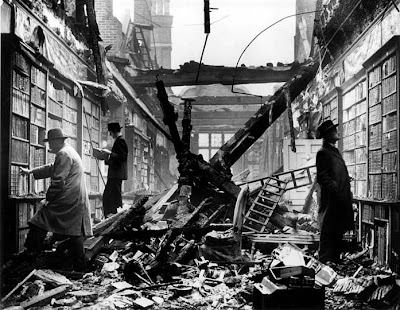 "The council once asked us for an assessment of outcomes, not output," says Ian Stringer. "Output was how many books we'd stamped out, and outcome was something that had actually resulted from someone borrowing a book. So say someone took out a book on mending cars and then drove the car back, that's an outcome; or made a batch of scones from a recipe book they had borrowed. It lasted until one of the librarians told the council they'd had someone in borrowing a book on suicide, but that they'd never brought it back. The council stopped asking after that."

Between the society that gave us libraries and and the bureaucracy that demands outcomes of us there is an unmeasurable distance. Regrettably, the people who want the outcomes are in charge.

Love the story, love the picture...but I suspect the picture has a story of its own. Do you know what it is?

I am glad you asked, because I do know. It is the library of Holland House, in Kensington, London. It was built in 1605 but bombed in 1940; a sad end for a beautiful building.