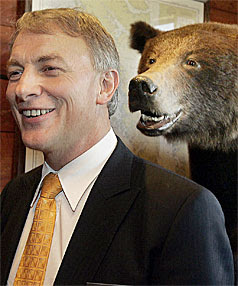 Am I outraged, jubilant, disgusted, triumphant about the killing of Osama Bin Laden? None of the above; I am relieved he is gone but uncomfortable with the circumstances of his passing. I want it to lead to something better and hope it does not lead to something worse. My concerns are with the rule of law; my feelings of solidarity are with his victims and their kith and kin.

Moving right along, here's a story from Auckland University:

Staff and students were shocked yesterday at the Law and Arts Graduation ceremony when university officials barred entry to the ceremony to one of the University’s top-achieving students.

Vernon Tava, who graduated with first class honours, Masters in Law, was told to remove the small yellow rosette pinned to his regalia which called for staff and students to unite to defend the university.

The rosette was part of a staff and student campaign to prevent the vice-chancellor removing important academic conditions of work from their collective employment agreement.

Tava was told that unless he removed his rosette his degree would be withheld and he would be prevented from crossing the stage. When he refused to surrender the rosette he was threatened with disciplinary action.

Now read on. Two points seem to be worth making here: 1) it is really nasty to prevent a student receiving his degree; 2) it is really stupid to pick an argument with someone who has a first-class Masters degree in law.
Pic unrelated. Here is REM: Discoverer was made by Michael Stipe's sister, Lynda, with AutoCAD.