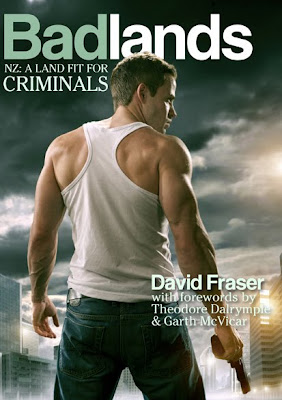 Calling all gays, calling all gays. Does this image look straight to you? I only ask because it is the cover of a new book published by Mr Ian Wishart's Howling at the Moon Publishing. I suppose the image is designed to make readers fearful of the menace of criminals stalking our streets but, at the same time, that dangerous criminal does have a white singlet and lot of muscle tone.

Anyway, the book received an extensive puff job, sorry in-depth analysis, on the cover of the Sunday Star Times. Gentle readers might notice the absence of any opposing viewpoint. We can only suppose that Neil Read, the author of this story, was too busy to contact anyone from the Howard League for Penal Reform or any other organisation which might have a view about the imaginative idea of throwing criminals into jail. Gentle readers might also notice that Mr Read describes Mr Fraser, the author of the book, as an international law and order expert in the first line of his story, only later revealing that, by this, he means Mr Fraser worked as a probation officer and then as an analyst for the NCIS in Britain. Probation officers are hard-working and decent people but their expertise is in probation, not in the efficacy of locking up the crims and throwing away the key.
Gentle readers might further note that this book has two forwards [insert rugger joke here], one by the ubiquitous Garth McVicar, the other by the equally ubiquitous Theodore "not his real name" Dalrymple. So, this is a book written by a retired probation officer and forwarded by a farmer and a retired prison doctor. I guess they couldn't get anyone with expertise in crime and punishment.
That last comment wasn't ironic. They couldn't get anyone with expertise; nobody who knows about this subject, who works in the field, believes that prison is a solution to crime. That pretty boy on the cover is a model and his gun is a toy, just as crimes, for the most part, are not committed by dangerous professional criminals who swagger round the photoshopped streets of an imagined metropolis with guns. Prisons are full of people who should have received help with their various life problems a long time ago, before things got really bad for them and for the rest of us.
Perhaps if Mr Reid were to talk to someone who knows about this issue, rather than assisting Mr Fraser et al to frighten us, we might start making some progress. But that wouldn't happen because fear sells more papers than thinking.
Here's a really rough video of the original lineup of The Heartbreakers, with Richard Hell on bass, vocals and coolness.
Posted by Paul at 8:26 pm

Hans Versluys said...
This comment has been removed by the author.
9:13 am

If he was going to be my cellmate I would consider a career in crime too.

I say with a mind addled by care of an infant and considerable cattarh, that the young man on the cover also looks as if he would be useful doing some heavy lifting around the house. What a strange image, and how detached from the detail of who gets imprisoned in New Zealand: white, clean-cut, buffed by the private gymnasium and lacking any kind of tattoo or visible signs of philosophy or allegiance. He is cheaply posed, and superimposed, a fantasy of the Die Hard school (when action dramas in the country must in fact pass through the anxiety of influence of Braindead).

Can we not use Ian Wishart's name and homosexuality in juxtaposition? The idea is rather sickmaking...

I blame the true crime genre for this. It tends to have become a modern morality tale, involving opportunities to bonk sexily and enjoy The Dosh, just as long as one Comes to a Sticky End involving firearms, drugs or the lack of undies... ie Oz's Underbelly. Definitely some cute backsides on display there, he said lustfully...