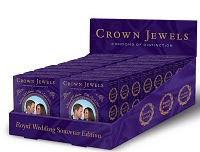 Her art history tutor barely remembered her at all. "She did nothing to draw attention to herself," was his judgement. "Very discreet." Her final-year dissertation on Lewis Carroll's photographs sounds promisingly controversial (are all those raggedy-urchin girls the fantasy portraits of a closet paedophile?) but she "dealt with the issues sensitively and intelligently".

The Independent, the paper founded on the principle of ignoring the royals, succumbs to wallowing in the wedding. The Telegraph has the whole story about the Art History Years:

Professor Peter Humfrey was head of the art history department when William and Catherine were undergraduates. He was obviously very aware of the future king right from the beginning, but he barely remembers Catherine until she took the final-year course he taught, Titian and His Age. 'It included architecture,' he told me, 'and I think I'm right in remembering that she did a paper not on Titian or painting but on a Venetian palace called the Palazzo Corner.

Meanwhile our own Paul Holmes has been found in a rambling, incoherent state - in the Weekend Herald, as usual. In another part of the woods, someone with the improbable name of Wendyl Nissen writes parvenu fan fiction. When will it all end?
And what of truth and beauty? How is it that Ms Middleton has become beautiful, in the last few days? You probably didn't read much of Paul Holmes' essay, and for that you are blameless, but somewhere towards the end he makes this incisive argument:

In fact I heard Kate's voice for the first time the other evening and was shocked, Kate sounds posher than he does. God knows where she got that voice. Never mind. She's beautiful, already one of the most beautiful royals ever, international opinion seems to think.

The voice thing is easily explained. Kate Middleton speaks Received Pronunciation. RP is usually received from an elocution teacher; it is unknown in the wild. Prince William speaks the Lower Devonian accent which is popular throughout Ingerland and which at least is better than Estuary English. She speaks up, he speaks down. Sorted.
The beauty thing is more difficult to explain. It seems that Miss Middleton, never before regarded as beautiful, has become so by force of Internet. Recently, she became the Third Most Beautiful Royal in History, because of a poll. This revelation might throw aestheticians into something of a tizz, since no theory of beauty accounts for the event of someone becoming beautiful overnight, still less over a tea break.
But the aestheticians should remember the other royal wedding, where Diana Spencer was transformed from Quite Pretty to The Most Beautiful Woman in the World without her appearance changing in any major respect. It is also worth noting that all the Most Beautiful Royals in History were born in the 20th century and that none of them was born royal. Further, it should be noted that Grace Kelly is the only one who was really hot; not coincidentally, she was the only one with a personality.
Of course, Prince William was once considered beautiful; but then he grew older and the Saxe-Coburg-Gotha genes took their revenge. Regrettably, he has no personality to compensate for his Windsor-pattern baldness.
Posted by Paul at 4:41 pm

Diana was much less ugly after her nose job.