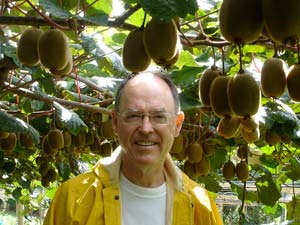 The process now is for Don to join the party. His membership will be accepted by the Board on Saturday. I have asked our whip John Boscawen to organise a caucus for Saturday where Don will have my full support to be leader, and the Board will reconvene that afternoon to ratify his leadership.

Paging Dr Kübler-Ross... I cannot help but feel sorry for Rodney Hide. Not only is he replaced by a carpet-bagger, he feels obliged to write this rambling farewell Had I been him, I would have just said "arse" to the lot of them.

But then, that is the nature of ACT: not so much a political party, more a cult. Convinced of their own rectitude and charged with the duty of saving New Zealand from itself, ACT members are an odd bunch. Most of them don't seem particularly well off, yet they are in thrall to the mysterious plutocrats who finance the party. Mr Hide may have erred but Dr Brash really has nothing to offer, nothing but huge amounts of dosh:

In the afternoon, Ms Calvert and Sir Roger meet Dr Brash in his Auckland apartment. Among the issues discussed are Dr Brash's position on the Treaty of Waitangi and Maori issues in general. This strikes a chord with Ms Calvert, who has been a fierce opponent of the Government's position on the foreshore and seabed legislation.

Dr Brash also talks about the considerable funding he is likely to bring to the party.

What indignity for Mr Hide: wrong-footed by the ghastly Sir Roger and the imbecilic Calvert, replaced by a man who has never won a popular vote in his life, who could not even unseat Bill English, who wouldn't recognise loyalty if it was printed on the banknotes, a man without a reflection.

And what this awful bunch seem to have forgotten is that Mr Hide won an electorate, took it from the Tories and held on to it. He also has a sense of humour and some humility.

No wonder they got rid of him. Rodney Hide is a human being.


Image shows Dr Brash among the pods containing others of his kind. From deep space the seed is planted. Here's the Charlatans:

"He also has a sense of humour and some humility. No wonder they got rid of him. Rodney Hide is a human being."

Yes. Some years ago I spent a very enjoyable evening with him. He was very smart, very funny and very friendly. I liked him a lot. I hope he is happier now this nonsense is over.